From The Vault - Fallout Wiki
(Redirected from The Ultra-Luxe)
Jump to: navigation, search

The Ultra-Luxe. Live life in the lap of luxury.

The Ultra-Luxe is a hotel and casino on the New Vegas Strip. It is run by the White Glove Society, a secretive group of gourmets who appreciate the finer things in life.

The Ultra-Luxe is a luxurious pre-War resort built roughly at the same time as The Tops casino[1], featuring finest quality accommodations, a world class restaurant, the Gourmand, all to provide its patrons with the highest possible quality of service and living. It is an establishment of ineradicable refinement that delicately conceals its operators' more questionable past tendencies. Almost needlessly to say, the Ultra-Luxe pampers its clients and provides The Strip's most elite casino experience. A dress code is strictly enforced. All of the staff and family members are well-dressed, well-spoken, and well-behaved. The casino's prime attractions are its meat-oriented restaurant, The Gourmand, its cocktail lounge, Top Shell, and its art gallery. Roulette and blackjack are the only games offered.[2] As Mr. House himself describes it; "[They] put together one hell of a resort hotel, too. From what I hear, I'd want to eat at the Gourmand every night... if I were ambulatory."[3]

The Lobby and Casino area contains the lobby and casino, obviously. The highly fashionable bar, "The Top Shelf," is also located in the entrance room that doubles as the casino. The drinks are overpriced, but that's the point. Mortimer can be found at the reception desk. The door to the cashier has an average lock. There are three metal boxes within the cashier area at the bottom of a shelf that hold your weapons and those of your two potential companions, and a variety of random caps and small loot in the other safes and containers. 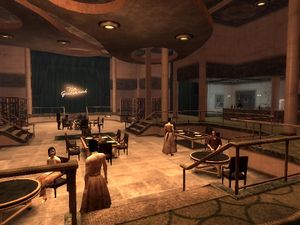 The Gourmand is a famous restaurant run by temperamental chef and White Glove Society member Philippe. The restaurant is renowned for its famous brahmin Wellington, and boasts a long waitlist, even though it usually seems sparsely populated. Gamblers, travelers and other Strip tourists found here will theorize the White Glove Society is more interested in maintaining the Gourmand's air of exclusivity than filling the restaurant, and are subsequently padding the waitlist and arbitrarily denying access to customers. This suspicion is commented upon by Mr. New Vegas on Radio New Vegas.

The basement kitchens of the Ultra-Luxe are accessible from the Members Only Area, where the door is unlocked, and The Gourmand, behind a door with an easy lock. The basement itself consists of a number of rooms, including Phillipe's actual kitchen, the pantry, the locked freezer containing Ted Gunderson, an elevator back upstairs, and a wine room, containing a bottle of wine the player can spike with sedatives as part of Beyond the Beef. The basement hallways are regularly patrolled by a small group of three White Glove Society members, two of whom will initially be seen at the bottom of the first set of stairs "roasting" brahmin with flamers. They will confront the player if the player is caught in the basement without honorary White Glove Society membership, and will turn hostile if the player cannot pass a speech check.

The Ultra-Luxe Members Only Area consists of a large dining room, adjoining prep room, reception area, closet, and 10-12 members of the White Glove Society, some of which are armed with dress canes and described as "bouncers." The bouncers will be hostile towards the player unless the player has been inducted as an honorary member of the White Glove Society by Marjorie, and subsequently been given a key to the rooms. An unlocked door in the prep area leads to the Ultra-Luxe's kitchens.

A high quality tiled bath house, including an indoor swimming pool, lounge and steam room, where the player can meet the investigator's contact during the Beyond the Beef quest. The salts for the bath are imported all the way from California.

Heck Gunderson is staying in this room, and has left several of his bodyguards here to watch the place. They will be hostile to the player, so killing them or sneaking past them is required to loot the suite.

The Courier needs a key, held only by the receptionist, Mortimer, to access the elevator to the suite. Mortimer can be killed or pickpocketed for the key. Alternatively, he can give the key to the player during Beyond the Beef in some paths through that quest.

In the situation one does not possess a key, a lockpick skill of 75 allows access. Once inside the player can see a small foyer leading to what appears to be a small guest dedicated portion of the suite. Further inside the suite is quite grand and the ceiling is possibly the highest of all Penthouse/Presidential Suites in New Vegas. In the middle of the large suite is a shallow pool and to the right is the dining room and kitchen. Upstairs is the master bedroom with a bar and the bathroom. Sleeping in the Penthouse Suite is impossible because the player does not own the beds.

The Bon Vivant Suite, located on the same floor as the regular hotel rooms, is given to the player for winning 11,250 chips in the casino. It is located in the Hotel Room area and is not to be mistaken for the Penthouse suite in which Gunderson is staying. The room is average for the Ultra-Luxe and includes two beds that the player may sleep in. Curiously, most of the room's contents (containers, items, etc.) are set as owned and register as stealing if opened or taken.

Should the player acquire enough chips, the floor manager will offer increasingly valuable gifts, culminating in access to the Bon Vivant Suite.

After the player earns 15,000+ chips, they are banned from playing games at the Ultra-Luxe. They can still use its other functions, such as the restaurant and cashing out their chips, but they cannot win any more money at the Ultra-Luxe. Like all other bans, this ban is permanent.

The piped-in music in the lobby and casino consists of the following tracks:

The Ultra-Luxe appears only in Fallout: New Vegas.