From The Vault - Fallout Wiki
(Redirected from This Galaxy Ain't Big Enough)
Jump to: navigation, search

This Galaxy Ain't Big Enough... is the final main quest and achievement in the Fallout 3 add-on Mothership Zeta.

Reunite with the others

You exit the space walk in an airlock on the observation deck. Activate the switch to repressurize the airlock; you can now remove your spacesuit. In the next room is a teleporter back to the engineering core; activating this allows Sally and any surviving abductees to join you. Sally then crawls through a duct to power down the energy gate leading to the next part of the level.

Disable the death ray and take the bridge

After the door is open, head down the hallway into the room with the glass floor. Enjoy the view of Earth. After a short dialog, Sally will go to open another door. Immediately afterwards, a hologram of an alien will appear over the glass floor, and you will learn about the death ray. Once Sally returns, proceed through the newly opened door. You will find a deactivated teleporter and be tasked with finding the other end and turning it on.

Upon entering the weapons lab, you will face aliens, turrets, and robots (make sure you obtain the Xenotech Expert perk before leaving). After defeating them, turn left and go down the hallway on the far side. In a room to the right, you'll find a drone pod with a guardian drone. Once you reach the T-intersection, turn right. Follow the hallway to the second floor of the weapons lab. Go down the stairs and through the door in the middle. Once in another room, turn left and go upstairs. Go thorough the circular door and follow the room to the left. Go into the hallway to the northeast and up the stairs into the experimentation lab.

Once in the lab, veer right into another room and go down the hallway before you. Follow the hallway until you reach a large room with a force field covering a door on the other side. Activate and destroy the power generator in the middle of the room to disable the force field. Head down the hallway and enter the biological research lab.

Head up the stairs on the opposite side of the room. Turn right and go across the bridge. You will find a shielded door and switch to the right. Go through the door and turn right. Walk straight across the platform to the teleporters. Note: once you use the teleporters to the death ray hub, you cannot go back until after the quest is over. If you're going for Alien Archivist, make sure you have all the previous recordings. There should only be one more to get after this point if you've been doing it correctly.

Fight your way through the death ray hub to death ray control, where you'll face a room full of hostile aliens. Once they are defeated, press the button with the cylinder graphic above it four times, causing the four generators to rise. Repeat the same pattern to overload each one. After you destroy the second generator, another wave of several aliens will attack you. If you'd like, you can redirect the death ray from this room as well.

Once all four generators have been destroyed, the door across the way opens to the living quarters. You'll encounter portable shields here for the first time, which can be destroyed by several hits. Fight past turrets, aliens and the occasional abomination to reach your final destination: the teleporter to the bridge.

Note: Once you enter the bridge, you are committed to finishing This Galaxy Ain't Big Enough... and will not be able to re-enter most areas of the ship. Be sure you've finished exploring Mothership Zeta to your satisfaction before entering the Bridge.

Once you arrive on the bridge, your next objective is to kill the alien captain. The captain himself is fairly weak, but he does carry a powerful weapon, the captain's sidearm which fires multiple shots at once. There are also several other aliens in the room, armed with alien atomizers. Note that your allies (if any) may kill the alien captain without you. Once he is dead, a large holographic alien head will speak to you, but as always, it is impossible to understand. Once he's done talking, another alien ship passes by yours, and attacks the Mothership with its death ray. 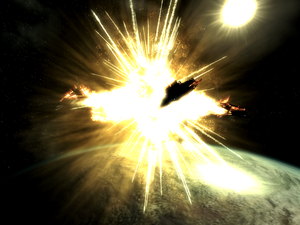 Destruction of other mothership

Your allies (if they have survived) will come to the bridge. Sally remarks that the control room looks exactly like the one from Captain Cosmos and that she knows exactly what to do. She orders everyone to take a specific position on the bridge. Paulson, however, is asked to "guard our backs" (specifically, Sally tells him he can be the space monkey to which he replies "I ain't no goddamned space monkey"); he remains in the area with the teleporter.

Now you must destroy the attacking alien ship. You can command your ship's Death Ray and Shields, and determine how the power in the ship should be divided between them:

Anti-Spoiler: Try to just 'wing-it' your first time through. 'Button-smashing' your way through this battle adds a comedic accent that seems to have been intended by the designers.

Occasionally a hit from the attacking ship will cause the ship's generators to go offline. You must reactivate them via the four buttons located on the east and west walls of the Bridge. While the generators are offline, Elliot will not be able to use the teleport jammer. This will result in aliens teleporting into your ship and attacking. If you want to make sure everyone survives, it is advised that you kill the aliens before going back to restarting the generators.

Once you damage the attacking ship halfway, Somah will say that the shields and Elliot are down (the shields will come back almost immediately, and Elliot just gets knocked to the floor when the panel explodes). At this point, the teleport jammer will no longer be active at all, and aliens will teleport into your ship more frequently whether the generators are online or not. Elliot will then head through the teleporter (it will lead to the Engineering Core after the battle so it can be assumed that it took him there, despite it currently leading to the Living Quarters). He will then return after the battle is over. 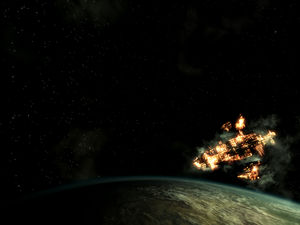 After the hostile ship has been destroyed and the fireworks have ended, speak with Sally to finish the quest. You may now use the still-accessible parts of the ship (mostly the bridge, engineering core, and steamworks) as your own home.

After you leave the mothership, Somah and Paulson are removed from the game and you can never see them again.