Thunder Mountain Power Plant is a location in Fallout 76. 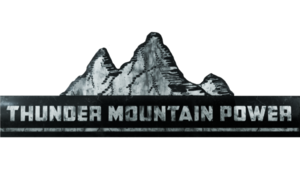 Thunder Mountain was one of three nuclear power plants in Appalachia, providing energy to the entire region. Automated through the use of Poseidon Power Management System from Poseidon Energy, it could be maintained and monitored with a minimum of human oversight and would automatically shut down the plant in the event of a critical failure.[1]

This allowed the plant to survive the Great War without experiencing a critical meltdown and was ripe for the picking when the Free States emerged from their bunkers. A unit under one Deke took the power plant and secured it for use as a stronghold, although soon they were attacked by a military unit - Taggerdy's Thunder. After demonstrating their ability in a shock and awe attack let Deke's men shaken, though without any casualties, Taggerdy's men opened negotiations: In return for vacating the power plant, they would not be harmed and permitted to leave with their weapons and equipment. Together with a 12 hour deadline, the decision was obvious: Although some Free Staters wanted to stand their ground and fight, Deke's calm assessment of the situation prevailed and they vacated the power plant, marching out with the Thunder's guns pointed at them.[2]

The Thunder and then the Appalachian Brotherhood of Steel that formed around it steadily restored and maintained the power plant, providing power to the Brotherhood's facilities across Appalachia. When the deteriorating strategic situation forced Taggerdy to tighten the belt and abandon non-essential facilities like Camp Venture, Thunder Mountain remained online to power the anti-aircraft artillery emplacements in the Bog. In fact, it was the last location of the Brotherhood to fall, lasting a full day after the fall of Fort Defiance. The last two soldiers left were Squires Rosen and Gilden, after the scorched forced the garrison off the roof and overran the forward assault team. Once they were killed on August 19, 2095, the Thunder Mountain power plant fell silent and remained so until the emergence of Vault dwellers from Vault 76.[3]