From The Vault - Fallout Wiki
(Redirected from Tribal)
Jump to: navigation, search 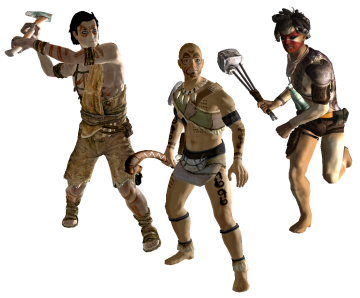 The only way I know to create a Garden of Eden is through plain old hard work. That's something you tribals just don’t seem to understand. But I guess that’s the difference between us civilized folk and yourselves.

Civilized? You think you’re civilized because you live in the burnt-out ruins of a beforetime town?

”— Maida Buckner and the Chosen One

A tribe is an ambiguous term, generally used to refer to stateless societies that emerged across wasteland, characterized by the absence of formal government, a distinct cultural identity, and self-sufficiency. The term tribal is typically used as a pejorative noun by inhabitants of various non-tribal communities, to describe someone as primitive, uncouth, and unsophisticated.[1]

In a broad sense, every human society can be described as a tribe, a linked family of families, regardless of the place they inhabit or other circumstances.[2]

The pressures of life in the wasteland, especially in the immediate aftermath of the Great War, resulted in the emergence of tribes as the dominant form of organization of human societies. Focusing on the immediate needs, the tribes typically returned to simpler methods of agriculture, hunting, gathering, and in many cases, raiding.[3] Reliable technologies that did not require a great deal of technical knowledge dominated. As this knowledge disappeared, it was replaced by skills in surviving in the wasteland, harnessing its bounty, and surviving. As a result, tribesmen tend to be intelligent, curious, and adaptive, but lack knowledge taken for granted elsewhere.[4]

Isolated tribes, like the Dead Horses and Sorrows that inhabit Zion Canyon, have developed a very distinct culture and even language. They are seen as degenerate, as they do not share the language of the wasteland. Dealing with them frequently requires an interpreter.[7][8] These tribes can be superstitious about remnants of the pre-War world, treating them as taboo.[9]

All tribes express their unique cultural identity in various ways. Body modification (such as tattoos or piercing), hairstyles, war paint, and even weapons serve to emphasize their identity and set them apart from other human groups. For example, apart from an unique appearance, tribes of the Great Basin and Colorado Plateau are associated with a specific weapon.[10]

These tribes are commonly seen as vulnerable and ruthlessly exploited. For example, traders hawk pre-War goods as religious artifacts, selling them at greatly inflated prices.[11] Others, such as NCR prospectors and settlers, may seize tribal territories and exterminate entire tribes if they resist. New Canaan missionaries recount situations where prospectors stalk and harass tribes for days in order to box a tribe in, then use grenades to eliminate them.[12]

The following list summarizes information found in the respective articles. Consult them for additional information and references. The list does not include unidentified tribal groups that make up the Oregon cannibals or nomads.

Tribes outside the main continuity

The depiction of tribals in Fallout 2 was heavily inspired by Earth Abides by George R. Stewart.[14]