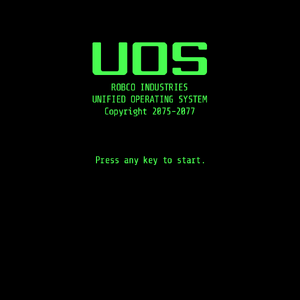 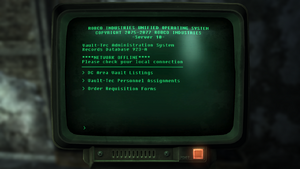 The top level menu of a terminal running the UOS

The Unified Operating System (UOS) is an operating system developed by RobCo Industries which manages the hardware of a computer and acts as a software environment in which computer programs can be run efficiently. It runs on a computer mainframe.[1]

The UOS was published and copyrighted by RobCo Industries in 2075 with an expiration date in 2077.[1] As the name suggests, it is an operating system: A software medium between the user and the computer hardware itself, including the kernel, which controls the very basic processes like memory management, the execution of programs and drivers which handle networking between computer terminals and mainframes, as well as sending and receiving of data to and from the keyboards, mice, monitors etc. which are connected to them. The operating system is also responsible for the user interface, i.e. what the terminal user sees on the screen. In the UOS's case, this is a command line interface.[2]

To boot, the Unified Operating System relies on the MF Boot Agent and the RETROS BIOS, which initialize the hardware, run tests, and then proceed with booting the system.[1]

The system is backwards-compatible with various software released for previous versions of the operating system, such as the Journal-It Software published by PagSoft in 2072.[3]

The UOS bears a more than passing resemblance to the real world OpenVMS system, especially the terminals and terminal commands the Lone Wanderer can be seen typing in to hack into systems. The SET FILE/PROT= command is a valid VMS command, as well as the SET TERM/INQ command. The terminals themselves are labeled RT-V300 in the game, which probably means Remote (or RobCo) Terminal Video 300. The corresponding DEC (now HP) terminal would be a VT-300 terminal: Video Terminal-300. The RT-V300 terminals have the same "look and feel" (font, green screen, etc.) as the DEC VT terminals and look very similar to a DEC VT-100 terminal.