The United States Capitol (referred to as the Capitol building in the game) housed the legislative branch of the federal government of the United States. Now abandoned, the derelict landmark is located in Washington, D.C., on top of Capitol Hill at the east end of the Capital Mall. The other side of the Capitol opens onto Seward Square.

The former seat of the United States Congress, the Capitol was originally designed by architect William Thornton and construction began in 1793. In 1850, the Capitol was expanded to accommodate the growing number of representatives from member states, doubling its size and creating the distinct shape of the building. It is also the center of Washington, DC, from which the four districts of the city are defined.

The War and two centuries have taken its toll on the building. While the outer shell remains more or less intact, the interior is devastated: many parts of the Capitol remain inaccessible, while those that are remain in a state of advanced devastation, even prized jewels of American architecture, such as the National Capitol rotunda or the Hall of Columns that runs across the north-south axis of the Capitol, beneath the ruined House of Representatives chapter. 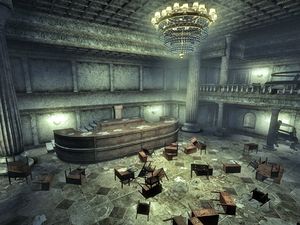 Upon entering from the west, the other door into the Capitol Building east entrance is immediately ahead and to the right. The entrance to the third area, the Hall of Columns, is in almost exactly the same direction, east-southeast, but about six times further away, past the super mutant behemoth in the rotunda. At the end of the Hall of Columns are two stairwells; the door at the bottom of the second accesses the fourth area, the Conference Room.

A door in the northwest corner of Conference Room area leads back to a room one floor above the southeast corner of the west entrance area, but it is effectively a one-way passageway, as when the player goes through, the floor of the upstairs room caves in and crashes down to the room beneath. This also triggers a second battle between opposing forces in the rotunda (Talon Company and mutants, although these battles may differ by level). 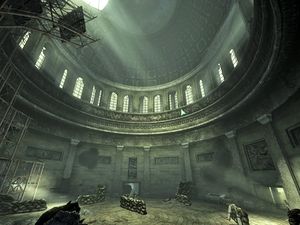 The Capitol Building appears only in Fallout 3.

On May 8, 2007, Bethesda Softworks released a piece of Fallout 3 concept art by Craig Mullins depicting the Capitol after the Great War. This picture appeared then in an apparent terrorist threat, said to be shown in some Islamist forum as a real-life would-be scenario, according to media. Source: http://www.news.com.au/al-qaeda-urges-use-of-wmd/story-e6frfkp9-1111116473744