As part of the Unified Community Platform project, this wiki and 38 others will be migrated to the new platform, with migrations beginning September 23rd at 7am CDT. Minimal changes are expected as part of this migration. Read more here.

History of the USSA space program 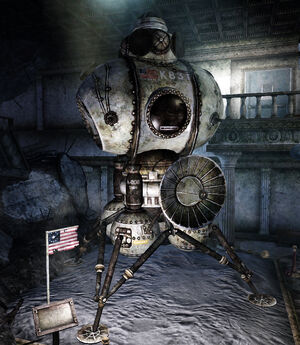 On May 5, 1961, Captain Carl Bell of the United States Space Administration (USSA) became the first human in space. This claim was disputed by both the Soviet Union and China. Captain Bell's flight in Space Capsule Defiance 7 lasted twelve minutes and seven seconds, and made a full revolution around the Earth. Bell died when the capsule crashed on its return to Earth.

In 2020, the Delta IX rocket was commissioned by the USSA, and constructed by REPCONN Aerospace. The Delta IX rocket was the last of the manned rockets to the Moon. The longest recorded spaceflight in a rocket of this type was the 17-day Zeus 12 Mission to the moon. Almost 15 years later in 2034, the Delta IX Rocket was converted for U.S. military purposes. The crew and instrument sections were replaced with a nuclear warhead.[1] The last manned mission to the moon, which recovered the Valiant 12 flag from its surface, occurred in 2052.[2]

During an unknown year (presumably during the early or mid 1960s, judging by the design of his spacecraft) Colonel Hartigan and his ship Clarabella 7 were returning from a low orbit space flight when Mothership Zeta abducted them, His recording demonstrates him trying to make a peaceful "first contact" with the aliens, until he is violently cut-off by them.[3] In 2277, Colonel Hartigan is found dead in a cryo-pod in Mothership Zeta, still wearing his USSA-issued space suit.

By the 2070's, the USSA had managed to get a space station up and running, designated the Valiant-1, which, by 2102, had crash-landed on Earth, specifically the Toxic Valley region of Appalachia.[4]

The main goal of the project was to, as the name implies, reach the planet Mars.

In 2075, the administration approved ArcJet Systems as a contractor for the propulsion and communications systems the project would utilize.[5] Promised that the XMB Booster would be ready a year before the set July of 2078, the administration busied itself in the meantime, approaching ArcJet once again in December 2075, and being extremely pleased with the results achieved by then.[6] By March 2076, the USSA continued to stress key points necessary to the construction of the project, such as the set weight allowance, setting ArcJet months behind due to the issues they faced with the booster.[7] Finally, by September 2077, the unrest overseas caused the USSA to consider delaying the project by a year or more, with the Great War bringing it all to an end.

The U.S. government's real plan to survive a nuclear war was simply to find another planet to live on after having helped to destroy the Earth. A spacecraft designed to ferry the human race to another planet was either under construction or ready to go before the Great War broke out. The plan was for the government to flee to the Enclave's Oil Rig, wait out the conflict and then pack up the populations of the Vaults to head into space. The Vaults were funded by the U.S. government and, accordingly, the government had control over them. Ostensibly, they were intended to allow a selection of privileged United States citizens to survive the Great War. Secretly, however, a large part of the Vault Project (Project Safehouse) had a far more sinister goal.

Any voyage to space would have been very difficult and fraught with unforeseeable complications. Thus, to test the aptitude of the average American person to travel to another planet, many of the Vaults were designed to have some sort of critical flaw. Vault 12, in Bakersfield, California (better known as the Necropolis) after the Great War, had a faulty Vault door that wouldn't close all the way, allowing dangerous radiation from the Wasteland to leak in, leading to the creation of California's ghoul population. Vault 15 was built normally (the rock slide that buried its control center was accidental), but it was populated with a diverse mix of ethnicities and peoples to see what sort of social tensions arose when people of varied backgrounds were packed into a small, stressful environment.[8]

Eventually, due to either a change of plans by the Enclave's leadership or the spacecraft being destroyed, the Enclave abandoned their initial goal of settling on another planet and decided to resettle on the one they already had.

In 2073, the Bloomfield Space Center was in the process of building a rocket that would go to Mars. However, as nuclear proliferation reached an all-time high as tensions mounted around the globe in the midst of the Resource Wars, the U.S. government completed a space station/satellite that housed two-dozen nuclear missiles, each carrying four warheads as a reaction to possible nuclear threats. This orbital station was named the Ballistic Orbital Missile Base, or the B.O.M.B.-001, and it was considered the ultimate offensive weapon by the American military. The only things missing on the station when the Great War began were the main power reactor and the launch instructions and codes for the missiles. However, since all other space and rocket facilities had already used up their resources constructing the missiles for the station and launching the cargo rockets that carried them to the base, the U.S. needed to scramble to get the much needed codes and a power reactor to the station. Their answer was to convert the Mars rocket into the vehicle that would carry the codes and reactor to the base. The conversion started in 2074.

In August 2076, the Hermes–13 space rocket was completed and ready to launch at Bloomfield. Unfortunately, by October 2076, funding for the rocket and the Bloomfield center had to be drastically cut and diverted to the development of Vault technology, thanks in large part to the rising world tensions and the imminent threat of nuclear war between the United States and China. As a result, the launch of the Hermes-13 had to be put on hold. All personnel, except for a skeleton maintenance crew, were reassigned to other locations. Bloomfield, B.O.M.B.-001, and Hermes-13 were essentially mothballed. In November 2076, the Enclave seized control of the Bloomfield Space Center. They knew a nuclear war was imminent, so they tried to refit the Hermes-13 and convert it into a vehicle that would take selected personnel (mainly themselves) off-planet, the destination to be determined.

Unfortunately for the Enclave, the nuclear bombs started dropping less than a year later. All Enclave personnel at the space center were either relocated to "hot-spots" or took cover away from Bloomfield. The last people to leave shut down the sub-reactor at Bloomfield and abandoned the facility, letting Hermes-13 and Bloomfield brave the elements of the post-nuclear wasteland.

The USSA is a fictional equivalent of the real-world NASA in the alternate timeline of the Fallout world. It is mentioned in Fallout 3 and Fallout 4, even though NASA is mentioned once in Fallout 2 as well. (Although it's only mentioned by the raving Vice President Daniel Bird, so it might not be canon.)[9] While it doesn't specifically mention the USSA, the space program was a major element of the plot of Van Buren, the canceled Fallout 3 by Black Isle Studios.