Unsafe Working Conditions is a quest and achievement in the Fallout 3 add-on The Pitt.

Depending on dialog choices, the player may be beaten unconscious by the Pitt raiders, or the player may walk to Midea's quarters without too much harassment from them.

Once inside, Midea will inform the player of her goal: to steal the Cure from Ashur. The conversation is rudely interrupted by Jackson, a Pitt raider, who interrogates Midea as to what they were talking about. She stammers out a lie about the Lone Wanderer being the new "volunteer". Jackson buys it and leaves the player and her alone. She instructs the Lone Wanderer to go and gather steel ingots from the steelyard, because slaves that don't work are not tolerated. If the player inquires about weapons, she will point out Marco in The Mill for the player.

The entrance to the Steelyard is through a small buffer zone called the abandoned area. The Steelyard is an extremely large area, and is inhabited by feral mutated humans - nicknamed 'trogs' by the citizens of the Pitt. A door in The Mill leads to the Abandoned Area. In turn, the door to The Mill is in the corner of Downtown where Adan is welding.

It would help the player greatly to grab an auto axe from Marco in The Mill before proceeding, as the Steelyard is a rough place for an ill-equipped, unarmored player. Asking Kai - who lives across the square from Midea - for some food is beneficial as well.

Everett oversees all work in the steelyard and congratulates the player on their misfortune of being chosen to do such a dangerous task. He will walk the player through the abandoned area, and point out a trog scampering on a catwalk above. Everett will stop at the door and tell the player to proceed inside. 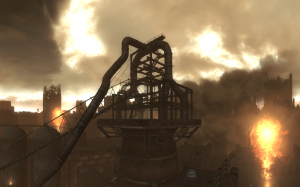 The steelyard is easily one of the largest areas in Fallout 3. It is an urban jungle of rusted steel catwalks, mammoth pipelines, and derelict buildings, as well as a relatively intact supply plant to the east. The first two ingots can be found directly in front of the player after entering the Steelyard, along with an assault rifle and some ammunition. That should help against trogs. The rest of the steel ingots can be found easily, although at this point, the player most likely isn't well equipped for a deep foray into the steelyard.

After the player leaves the steelyard for the first time, they are presented with an unwelcome surprise: a trog has ripped through the fence in the abandoned area and now stands between the player and the door to The Mill. Fortunately, the hole it ripped in the fence opens up a new area with a few extra steel ingots to scavenge.

"Well, now, look who made it back," grumbles a surprised Everett, as the player returns with the steel ingots. This will earn the player a laborer outfit, and possibly more depending on how many Ingots the player managed to return. The player will also receive the Auto Axpert perk, which boosts the player's damage with the related weapon and its variants. It is time for the player to head back to Midea.

Midea tells the player to prepare for a fight in The Hole, which she explains is one of the only ways a slave can earn their freedom, killing fellow fighters in order to be promoted to the ranks of The Pitt raiders. Outside, Ashur will address his workers from a balcony above the square in front of Midea's house, talking about The Hole and asking for volunteers to fight for their freedom. Midea speaks for the player, volunteering them, and Ashur accepts.

On your way to The Mill before the door there is a group of Pitt slaves huddled up. If you walk up to them they whistle and they spread out. A player with high enough sneak can sneak up to them and listen to their conversation. They talk about being anxious for what they are going to do, and one of the slaves says they know about the cure.

Signing up for the battles in The Hole is quite simple. Faydra is in charge of the fights and is located in a room in The Mill, at the bottom of a flight of stairs. The entrance to the stairs is tagged with a sign that reads, 'Arena'. Faydra will inform the player of the rules and the like. There is a locker in the room that contains common weak weaponry, usually a low-caliber pistol and a few makeshift melee weapons. The first fight is between the player and three slave fighters. The next round consists of the player fighting the Bear Brothers. The player spares off with Gruber during the final round.

Once the player has cleared The Hole, they are considered 'free' and may have an audience with Ashur in Haven. The player also receives their gear that was taken from them at the end of Into the Pitt in a footlocker just outside of the fighting area. The player will also receive the Pitt Fighter perk, which boosts Damage Resistance and Radiation Resistance by 3% each. This ends this quest and begins the next quest, Free Labor.