From The Vault - Fallout Wiki
Jump to: navigation, search
You have new messages (last change) 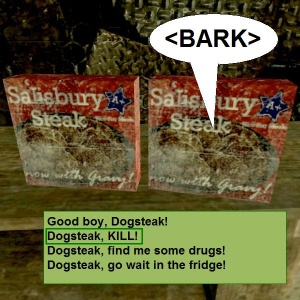 Poll 1 is Closed! Dogsteak was the winner!

Poll 2 is Closed! Coke was the winner!

Poll 3 is closed! A HELL of a lot of you were fooled by that thing at the top.

Poll 4 is closed! Apparently $3 worth of people voted. The internet doesn't value you it seems.

This is the sound of Nitty cleaning Spoony's page.

Quick on the draw

Hey (Not sure about what people call you) Spoony. You haven't been on for awhile. How are you? Did you know that I'm an administrator now? :).

I knew that, but it was worth a shot :p.

Is my new lord and master.

Well, besides the fairly obvious one. ;D
But he can only use one.
Never. But when you fail your math exams because you faint from exhaustion, Nazi Mum will have your new laptop on a platter. :O Nitty Tok. 02:48, June 6, 2010 (UTC)

"Non-capitalized" has received more votes in the poll. However, this being a community-created wiki and not a democracy, consensus is more important than majority rule. It would be great to hear your thoughts on the results. Can we agree to move forward with non-capitalization of article titles, even thought this was not everyone's first choice? Thanks for your participation.--Gothemasticator 16:16, June 18, 2010 (UTC)

Did you see World Cup match a few hours ago? I know cheaters when i see one. They definitely hired that ref to make them win, as evidenced by the ref not giving England that goal which was definitely a goal. Tezzla blah blah blah 17:44, June 27, 2010 (UTC)

I can except they are a bad team, however, they are not bad. They are good. The ref did not say it was a goal when it was. That kind of gives away that they had something to do with it. Tezzla blah blah blah 17:55, June 27, 2010 (UTC)

I forgot to loan you Fallout 3.

My Xbox is broken/being stupid, and as such, I have to send it back. On the bright side, I still got Cowed, and my PS3. So, what are you up to?

Are you going to fix it or wait until someone as alphabetically gifted as me sees it too? I mean, whenever I see a alphabet in the wrong order, (LOUD SOUND EFFECT) I'm right there, sending a message: Your alphabet is wrong. Not everyone has that talent. Awesomeo3000 01:50, November 19, 2010 (UTC)

Y should be for yeast

Well. Got married, working on my master's thesis and losing life over the Wiki and its achievements. http://images1.wikia.nocookie.net/fallout/images/0/08/Personal_Sig_Image.gif Tagaziel (call!) 13:14, May 15, 2011 (UTC)

But could you unban me from chat?