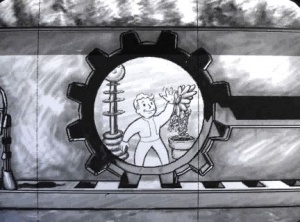 The Vault policy for editing guidelines specifies American usage, since that is the usage the game prefers.--Gothemasticator 02:54, January 4, 2010 (UTC)

I can tell you one thing by reading your profile. You have an ego thats opposite your penis. I'm implying your ego is big just so you know.Kisamerox57 00:29, January 12, 2010 (UTC)

I do nothing? I've been here forever just recently made an account though.

It's a decent idea, yeah, but I think that it's mostly redundant. The only people who've ever asked to get others banned are admins themselves now. (Which is to say Crazysam10.) We also have about 5 admins who show up from time to time to do things in their own little world (Killzig, Itachou, Game widow, KristofferAG, Veryblackraven.) and others who have left (AshRandom) so putting a template on each page wouldn't do much useful. It's a great idea, though. Nitty Tok. 06:06, January 10, 2010 (UTC)

Feral Reavers are actually coded into both Broken Steel and Point Lookout. If you haven't downloaded BS, you can still be attacked by Reavers in PL. However, they're sprinkled throughout the add-ons if you have Broken Steel. Nitty Tok. 06:16, January 10, 2010 (UTC)

We write it because the whole series of games takes place over many years, so it is a way of specifying a place in the timeline for npcs etc. Yes, the game can take as long as you like, but since it starts in 2277, using that date will be correct, while any other date depends on individual players of the game. 2277 is universal.--Gothemasticator 06:12, January 23, 2010 (UTC)

We haven't got round to completing the article yet. You can help complete the article if you want. Why doesn't that chicken wear pants? Because a pecker is on his head! 09:37, May 2, 2010 (UTC)

Yeah, that's cos Nitty removed all the videos because there are "too many for general bandwidth", what ever that means. All the videos need to be links instead of videos. Links to the YouTube videos.i put a picture of a different game on a Fallout wiki and there nothin you can do bout it 20:34, May 2, 2010 (UTC)

Pages that are related specifically to a user, like in this page, should be started with User:, so people know it is not an actual wiki article.

Apologies, I am very sorry for the inconvienience. I went ahead and moved all your writing to the page I linked to above, so if you want, you can make a link to the story from your user page, for easier access. Again sorry, I have not been very active at the wiki lately, and have been preoccupied with other things. However, I hope you can wave off my bad judgement :), and I hope to see you around the wiki! Ghouly89 (Talk) 06:57, May 6, 2010 (UTC)

"Deputy" is his rank, and is used as a title; we don't include titles in article names. --Kris

Not sure why, that's just the convention. Someone who's been around longer than I have might know. --Kris

For some reason, on August 29th, Strongpass decided to replace that picture with this one instead of uploading a new file entry, and then placed it into the article. It was reverted yesterday to the original. I'm gonna go ahead and upload the picture anew and put it back in, but properly this time. Thanks for noticing the problem. --Kris

It didn't seem right because indeed it wasn't right. It's fixed now though, the intended picture is in the article. --Kris

Check Ausir's talk page and Ausir's comment on my talk page ("Year" heading) for the answer to that. It's still not 100% certain but the only solid date we have is from All Roads which states that it takes place in 2281, so it's far more likely to be 2281 than 2280, and the guess is that they're talking "3 years later" as in 3 years after the unstated, canonical ending date of Fallout 3 which would be in 2278. --Kris

It's mainly because the stated start date for New Vegas is "three years after the events of Fallout 3", and the stated timeframe for All Roads is both "the week preceding Fallout: New Vegas" and "2281". For all those to be correct, Fallout 3 must end in 2278. --Kris

Highlight the gun and press random buttons. Try that Select button on the side of the Xbox logo button. Nitty Tok. 01:48, October 20, 2010 (UTC)

You buy a mod, then you scroll over to the weapons, and press LB(on 360) to mod the weapon, theyre permanent btdubs.

I caught your message to Nitty. I'd also like to know where he got his info, seems that Matthew Perry said it in an interview. Still want proof, though. Greets, Jspoelstra 03:30, March 15, 2011 (UTC)

You shall be one of my vault buddies!!

Thanks for catching that, I meant to revert it but for some reason it didn't =/ --

Well that is actually a debatable topics and I can see both sides of the argument, firstly the original source comes from Guys and Dolls. But on the other hand Frank Sinatra is the more commonly know source and probably more likely what the devs where referencing. There is no clear answer without a sourced quote from the devs, as to what that was actually a reference towards. I would say the best answer is to garner a few view in the talkpage on what would be best to title that section.

Thats because I have injected a little bit of HTML into the page to format the text differently, I just like it to be a little bit different and easier on the eyes for me.

I conceeded your point, but I am willing to bet my feet on that he had no knowledge of those weapons before he played a CoD, MoH or an equivalent of those games. This was not in the post, but I have used (blanks anyway) some of those waepons as I am very into history, more specifically political history. And BTW, I love seeing my favourite FarCry2 character in your pic! XD. Hugs Scar: "Say 'ello to my little friend!" 01:32, July 18, 2011 (UTC)

I'm trying to see how many pages I can vandalise before being blocked. Robin On Rollerskates 07:09, July 22, 2011 (UTC) trovy povy

I'll add more as I go the AC is being slightly difficult, but here's the MC, if anything looks off, tell me.

LMG, I'll do some work with the Carbine, but just getting these out the way, working on something I don't know just makes me better for the future. - Samuel L. Whackson Talk User blog:Crazy sam10|Poll 01:08, July 28, 2011 (UTC)

Here's what I could do with the AC, it's unmodded so yeah.

OK, this will take a little longer, the LMG was just pushing around some sliders, this is a little more complex, bu I should be able to do it, also I put the previous image smaller, sorry I keep forgeting. - Samuel L. Whackson Talk User blog:Crazy sam10|Poll 01:49, July 28, 2011 (UTC)

Sorted the images for the main page, unfortunately with the war hammer, unlike previous weapons, I am unable to separate the actual modified part of the model for the base. As for the sounds, someone is looking into that.

"they didn't fighting back"? --Kris