You can find all sorts of userboxes on this template page. You can browse through it to see what's possible. I will add one to your userprofile, which you can edit for a different image or text. Jspoel

You're an anarchist and an NCR supporter? --

I see. And my god this is going back years, I used to have a Dime Rebel Razorback in honour of the man as I used to like Pantera a lot more than I currently do but I haven't had much time to play for nearly two years now. I've been thinking I might move on to ESP at some point from a friend's recommendation but I don't know yet. I've been meaning to change that picture as well but I'm too used to it lol. --

Definitely, and nice picture in your profile infobox, Iced Earth is awesome. --

I only just realised you replied sorry. I've looked it up, "Dystopia" is it? That's damn appropriate for Fallout fans like us ;P --

Thank you M8 I do try

I'm glad you get my monkey theam ;)~ If I ever finish the edits I plan to try for publication, who know maybe one day we'll all have our own space monkeys ! P.S. I like your profile pic as well, is that your own art ? That was broke afore I got here! 02:17, June 23, 2011 (UTC) That's a sweet mix of heavy metals best bands ~ PC keep watch'n I'm editing Major Tom & his related quests daily.

Thanks for enjoying my page! And yeah, Adamska is pretty much legit. --

What do you mean? You have an inventory box. Please specify. --

If Kastera is creepin' on you or me, I fear for our lives. --

You know you don't need a new section for every reply, right? --

^ I popped up in your email? Anywho, back to Toes, yeah I usually edit from my ipod, so I can only make like 4 responses before I can't see the rest.

Vanity is one Hella free drug

I set up my preferences so I get an e-mail whenever a page I'm following gets changed. All you've got to do is go to "My preferences", then the Followed Pages tab, and from there check the boxes "Follow pages I edit" and "E-mail me when a page I am following is changed". If all goes well, your e-mail will be filling up. Kastera (talk) 02:14, June 25, 2011 (UTC)

Wow, Mr. House certainly looks... different there. Thanks for linking me that, I kinda missed the build up to New Vegas. I was still playing F3 for the first few months of NV's it's release, thinking "Damn, we could do with a new one of these", then I checked a quest or something on The Vault, and everything was about New Vegas. Grammarlad(talk) 09:34, June 26, 2011 (UTC)

That's good dedication, I tend to drift over to other games after a few weeks of playing New Vegas. I think I might pick up Fallout 3 again though, it's been a while since I've played it. Grammarlad(talk) 18:15, June 26, 2011 (UTC)

That's true, I might buy New Vegas on PC because there are some great-looking roleplaying mods available. Also, it's always tricky going back to essentially guessing where your bullets are going to go in F3 from using iron sights in NV. Grammarlad(talk) 19:29, June 26, 2011 (UTC)

Yeah, the laptop that I'm using at the moment just can't handle games made in pretty much the last 10 years, might get a desktop sometime soon though. Grammarlad(talk) 20:29, June 26, 2011 (UTC)

You add an image to the wiki, then include the code in your signature. To do this you have to go into your preferences and enable a custom signature then you paste it into the box. For example, my code for the Cartman signature image is: [[File:233345-cartman1_tiny.gif|25px|User:Cartman!|link=User:Cartman!]] with the link to my user page for obvious reasons, and I use the same technique for the talk icon. --

No problem, if you need anything else just ask. --

ToestheUnwholy, with the code:
[[File:SEt.jpg|25px|link=User talk:ToastheUnwholy]][[User:ToestheUnwholy|ToestheUnwholy]]
Change the size to whatever you feel like (the numbers before "px"), and I added the link to your talk page so that it's easier for people to contact you, and because otherwise clicking the image would just lead to the image page. --

Lol! Apparently I misspelled toes, the image links to a ToastheUnwholy's talk page, but that's fixed easily enough. And no problem. --

┌─────────────┘
Well I am the Foolish One after all. --

Indeed, and good to see you fixed it. --

I was hoping to keep my motives secret, but it seems I have been exposed. --

Lol, hope so for your sake or evil things will happen. --

┌─────────────┘
You haven't really done a good job of eradicating mankind so maybe my respect is misplaced. Ouch. --

Is Major Tom available through a mod?

Sounds interesting but I don't even know what that means, tell me more, please ?

Cool. Major Tom still needs a bit of work but if you got a direct link ?

Got the link. Thanks Dude & sure what you got in mind for our Monkey M8 ?

Give Major Tom a "dissecting" read through, you might find things I wrote that did not even occur to me on a conscious level.

Well That's a start for our mischievous monkey M8

Think on it ;)~ Feel free to talk to yer buddys. See what the world thinks ?.. I'd be proud just to be the one who got this monkey up & run'n! " Yes Man " said he'd be willing to help ~ I think it would be great if we could make it a Fallout WIKI project~ Bring this Bad Space Monkey to life my Brother "Hallelujah & pass the Jungel juice ;)~

Edit I would have called him Richard as in Dick but I think an Enclave President already used that word play..

And with David Bowie it would take on a neferious double meaning...

Yep That to.. Soo read all Major Tom again, mull it over, talk to freinds, have fun with it M8 ! See ya soon.

I'm not sure why but I always seem to have a problem seeing your replies. And it's alright, you can owe me ;) --

It isn't a technical fault or anything, it's probably because near the time you comment somebody else creates a new topic and it appears to be the only new addition. --

┌─────────────┘
You just proved it with that line ;) --

You should apply, just be careful about what you sign. --

Good call, I'd prefer being "slaughterer-of-man" than "man-whore". --

Yeah so was I, it was kind of a random change but I guess it's the only way to explain, you know... how we're still alive. But I heard SWTWC is meant to be a trilogy so you never know what'll happen. --

Lol! That's funny, I can't imagine it for some reason. HI THERE TOES. --

True, it doesn't matter how well (or not) you get on with other band members, the world is only going to recognise you for your music. --

Read some of the blog comments more often and that sentiment will soon change. --

Like I've told someone before, if you completely ignore the story and the time period (too much damage for 200 years to rebuild), then it's an alright post-apocalyptic backpacking simulation. It isn't a good Fallout game or RPG. --

I'm OCD so it has to be exactly 100 topics. And yeah, there's really only one role to play. I don't care if they "attack" me over it, it's usually amusing, and at least it helps them feel better. --

Even that is immersion breaking for me, an untrained 19 year old can wipe out an entire security force armed with police batons and pistols with nothing but a baseball bat. --

Use the Firefox browser, works perfectly. --

It takes less than five minutes, but alright. --

Works for me ~ I said in notes : Not married to the Enclave.. Really I thought the Commonwealth might do better.. We just need more voices on this.. Can't be a NASA base sure cause that's a 1960s idea..

Play with it & envite yer friends to play.. Make Major Tom " OUR " Space Monkey.. I thank you for play'n!

I dig it.. what would be a good time for you & me to sell this idea on the chat ?

This story is most near done.. we need voices of suport to get the Game makers attention.

You may join, and because we have no template for this the title was nom.

Nice, thanks for letting me know. It isn't annoying me don't worry, I can't see why it would. --

Looks nice, it's good to see Set there. And indeed I will. --

They might just be using him as the band mascot from now on. --

I must have read it too quickly. --

Hope you like what I did Brother Toe, If not I Owe You one user page X}

One of the 4 Dark Crystals

Here it is, a dark crystal, you, nash and michael haze each have one.

Preset 10 face with the hair & outfit you asked for.. 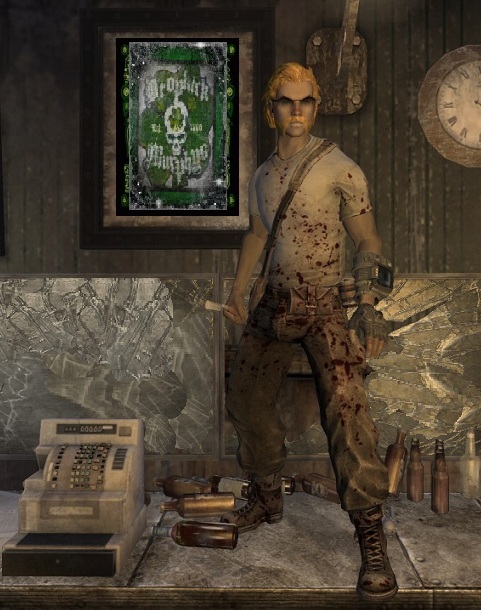 Would just like to thank you personally for voting for me. Now that I'm a moderator, I'll do my very best to ensure that your vote does not go to waste. Thank you and cheers. Almighty Higgey (talk page) 22:26, October 21, 2011 (UTC)