From The Vault - Fallout Wiki
(Redirected from V.A.T.S)
Jump to: navigation, search 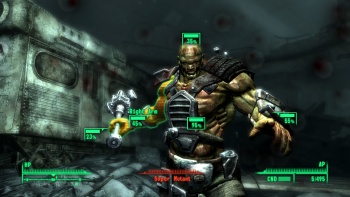 V.A.T.S., or the Vault-Tec Assisted Targeting System, is an advanced combat technology whose developmental origins have been lost to time...

The Vault-Tec Assisted Targeting System, or V.A.T.S., is a queuing system for Fallout 3, Fallout: New Vegas, and Fallout 4, inspired partly by the ability to shoot specific body parts in the turn-based combat system of Fallout and Fallout 2. V.A.T.S. is also used for a cinematic combat experience.

Although known to be a product of Vault-Tec Industries, the developmental origins of this advanced combat technology have been lost to time.[1]

When using V.A.T.S. against a humanoid enemy, you can target seven different areas: the head, torso, left arm, right arm, currently held weapon, left leg, and right leg. However, there may be other points available when facing off non-humanoid creatures (e.g. robot combat inhibitors, ant antennae).

When targeting a part, the screen displays a percentage of how likely the attack will hit the targeted area based on distance from the target, visibility of the targeted body part, and combat skill. A higher percentage does not equate to more damage done; for example, an 80% hit to the head/sensors will likely do more damage than a 95% hit to an armored torso. The readout also displays the overall condition of the body parts on the target. The bar will be empty when the limb has been crippled.

There is a 15% boost in the chance for a critical hit in V.A.T.S. mode, but weapons degrade at 4 times the regular rate.

Unlike previous Fallout games, it is not possible to target the eyes or groin nor target any individual body parts in melee and unarmed combat. However, you will still strike specific limbs without aiming for them, and you can still cripple and dismember enemies. Also unlike the previous games, you can't target children.

Although body part damage can be achieved through manual aiming, V.A.T.S. allows more effective targeting of particular body parts. The effects of crippling specific body parts are listed below.

Crippling any body part will result in the target momentarily pausing to clutch the now crippled body part or reel from the injury.

Unlike the earlier iterations of V.A.T.S., Fallout 4 has the system slow time instead of stop it altogether.

In contrast to previous implementations, in Fallout 76 V.A.T.S., due to being on the less advanced Pip-Boy 2000 Mk VI, does not stop or slow time and merely provides the ability to target a single enemy, and a list of attacks cannot be queued to execute. Only one attack can be done at a time, however, attacks are as fast as the player can pull the trigger. Also missing is the ability to target individual limbs. When using a V.A.T.S. attack, it will always aim center of mass.

Do people actually want to snipe with VATS? You're already at an enormous advantage at those long ranges. If you crouch, your enemies are likely completely unaware of you, meaning everything that is not a cazador is walking at a very slow pace or idling. If you hit the target with weapons with the appropriate range/FoV zoom, you score astronomical damage.

VATS isn't really a "mode" of play; it's a limited-resource power up. When you use it, you move about six times the speed of everything else, have damage resistance, and can instantly re-orient to any number of targets. While it's true that the weapon's min spread does go up in VATS, your weapon is oriented directly at the center of the body part you're trying to hit, completely eliminating the human error of manual targeting. Of course, VATS does still have problems dealing with collision interference and with minimum range on long weapons, but those issues are essentially the same in F:NV as they were in F3.

In F:NV, VATS is best used as a short and mid-range antidote to fast-moving melee enemies (e.g. deathclaws, cazadores) or a mob descending upon you.