As part of the Unified Community Platform project, this wiki and 38 others will be migrated to the new platform, with migrations beginning September 23rd at 7am CDT. Minimal changes are expected as part of this migration. Read more here.

From The Vault - Fallout Wiki
(Redirected from VB-02 Vertibird)
Jump to: navigation, search

The VB02 Vertibird VTOL (Vertical Take Off and Landing) is a multipurpose tiltwing aircraft that was developed by the United States military and heralded as the most advanced VTOL aircraft ever built,[1] succeeding the VB-01 Vertibird.

These Vertibirds were primarily used by the Enclave in post-War America, but since the defeat of the Enclave, Vertibirds have seen limited use from both of the New California Republic and the Brotherhood of Steel for transport of VIPs or for special missions.

Following the success of the VB-01 Vertibird, the military commenced work on a superior model, hoping to improve on virtually every aspect of the original: Better armor, better weapons, better speed and cargo capacity, everything. When the Great War struck in 2077, the XVB02 Vertibird was still in prototype phase, scheduled to enter full military service in 2085.[1] Limited trial runs were developed and pressed into service, including winterized models during the last stages of the Anchorage Reclamation[2]

Vertibirds of both types have appeared in the hands of the Enclave after the War, indicating the development cycle reached a stage allowing to reliably produce the aircraft. These were used extensively in field operations on the West Coast, which include trading with the Salvatore family of New Reno,[4] capturing of test subjects for the FEV Curling-13 research programme from Arroyo and Vault 13[5] and more. Around 2242, the Chosen One stole the Vertibird Plans from the Navarro base, making it possible that the Vertibird plans ended up in the hands of various factions of the wasteland. The destruction of Control station Enclave later that year has likely destroyed a large number of aircraft in Enclave's service. When the Navarro military base was later conquered by the NCR, Vertibirds stationed at the base were put into service in the Republic's armed forces.[6]

In 2277, Enclave forces that relocated to the Capital Wasteland deployed a large fleet of Vertibirds to support their ground operations in the region. These gunships were used in a decidedly military capacity. When the Enclave suffered a defeat at the hands of the Lone Wanderer, supported by the Lyons' Brotherhood of Steel, a large number of these aircraft were destroyed, both during the attack on Project Purity and the subsequent conquest of Adams Air Force Base.[7] 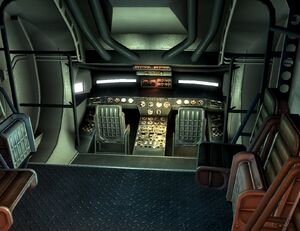 The Vertibird has a distinctive design, resembling a large dragonfly. It is a double rotor assembly, with one proprotor, engine and transmission nacelle mounted on each wingtip. For takeoff and landing, it typically operates as a helicopter with the nacelles vertical and rotors horizontal. Once airborne, the nacelles rotate forward 90° in several seconds for horizontal flight, converting the Vertibird to a more fuel efficient, higher speed turboprop aircraft. The Vertibird has excellent range (at least 175 miles[10]). Compared to the VB-01 Vertibird, it's smaller, faster, nimbler, better armored, better armed, and can carry considerably more troops or cargo.[3] However, rotor failures still effectively turn it into a plummeting coffin; such was the case with Daisy Whitman's Vertibird, which crashed near Klamath around 2241.[11]

The main fuselage is armored and extremely durable,[1] with a deceptively bulky appearance. The interior of the Vertibird is spacious for its size, as engine, fuel storage, and other systems that dominated the VB-01's fuselage have been distributed, miniaturized, or otherwise modified to accommodate a larger internal space. The cockpit transitions directly into the entryway and then into the troop section, located on an elevated platform in the middle of the craft, with six seats. Cargo and more personnel can be carried inside thanks to railings located inside the craft.[3][12] Transport variants instead use a cargo bay.[13]

The Vertibird has a standard, analog cockpit designed for two pilots in a side-by-side seating configuration, with instrumentation and flight controls integrated into consoles surrounding the pilots. In transport variants, the cockpit is made glass, providing excellent visibility. The gunship variant opts for a reinforced, armored cockpit with slits and external cameras for flight.[3] The crew consists of two pilots, although it can be reliably flown by one.[14] In transport Vertibirds, a Mister Handy unit is typically flown with the VTOL, for loading and unloading cargo.[15]

Weapon hardpoints are located in the front, near the cockpit. The Vertibird can be armed with a variety of weapons and defensive countermeasures,[1] with the most common loadout including Gatling lasers, missile racks, and a mini nuke bed.[3]

In Fallout 3, Vertibirds are mostly support craft, but will attack in a few circumstances. They are a significant threat for a wide array of reasons, but the biggest is that they pack an enormous amount of firepower on an extremely well-armored chassis. Their weapons include a nose-mounted Gatling laser, a pair of missile launchers, and a bomb rack for mini nukes. All of these weapons are threatening; the missile launcher deals heavy damage and can knock an opponent back. The Gatling laser can deal a lot of damage from afar, and the mini nukes, used in airstrikes against heavy targets and emplaced defenses, can kill a hostile instantaneously.

Fortunately, the Vertibirds the player character faces are usually set for a specific assignment - either dropping Enclave troops off, or flying racetrack circles and providing fire support. Vertibirds on insertion/extraction duty will not attack, but the Enclave soldiers they drop off will. Vertibirds tasked with fire support are the biggest threat. These Vertibirds often perform bombing runs, and make several passes to eliminate any resistance in the area. Vertibirds on these support flights may open fire with their missile launchers or Gatling lasers, though they do not use them as much as their mini nukes.

Vertibirds can be destroyed with heavy ordinance, though they cannot be targeted in V.A.T.S. The resulting explosion will scatter a great deal of debris, which will be visible to the player. A Vertibird explosion is significantly more powerful than that of a car or truck and will kill or seriously injure anyone nearby, including disembarking Enclave troops.

The largest concentration of Vertibirds the player will have to face is in the quest Take it Back!, and these will be automatically destroyed by Liberty Prime as it advances. The player character can, however, destroy them as they are hovering while engaging Liberty Prime.

Vertibirds can sometimes be encountered on the ground. One can be found on the steps of the Capitol Building in the Capital Wasteland. In these cases, upon finding one of the parked Vertibirds, there should be a cage containing a deathclaw near. When engaged in combat, the Enclave officer nearest to the cage will often let loose the deathclaw.

The following section is transcluded from Vertibird. To modify, please edit the source page.

When destroyed, the wreckage uses a slightly different texture set, including rotor markings and the emblem of what is likely to be the Enclave Air Force.

The designation "VB02" would, in real-world US military usage, indicate that it is a bomber aircraft. As the Vertibird's primary roles appear to be transport and ground attack, the "VB" prefix seems to be simply intended as an abbreviation of Vertibird. In post-1962 US Department of Defense nomenclature, the transport variation's designation would probably be CV-2, meaning "cargo/transport VTOL, design number 2", with the gunship variant being "AV-2", meaning "Attack Purposed VTOL, design number 2".

The following section is transcluded from Vertibird. To modify, please edit the source page.

These Vertibirds appear in Fallout 2, Fallout 3, and Fallout: New Vegas.