From The Vault - Fallout Wiki
(Redirected from VSS armory)
Jump to: navigation, search

The Outcast outpost is a Brotherhood Outcasts stronghold in the Bailey's Crossroads, unincorporated area of Fairfax County, Virginia. The Outcasts excavated a Virtual Strategic Solutions underground bunker, with the goal of recovering pre-War technology. It is the setting of the Fallout 3 add-on Operation: Anchorage.

The VSS facility was developed in 2077 after the United States Armed Forces commissioned Virtual Strategic Solutions, Inc. to create the perfect virtual war training exercise for the U.S. military based off the recently won Anchorage Reclamation. Overseen by General Constantine Chase, programming the simulation was a very meticulous process, much to the frustration of the engineers working on it.[1] Every minute detail had to be perfected by the programmers, including even the more outlandish claims made by General Constantine Chase; if the simulation did not meet Chase's scrupulous criteria, the entire simulation program was scrapped and started anew.[1] When the Great War hit, all of this work was rendered irrelevant. The facility survived, but large parts of it collapsed, burying the staff underground. The only part of the facility that escaped total destruction was the bunker, located three levels below the ground.[2]

It wasn't until 2277 that the Brotherhood Outcasts under the command of Protector McGraw excavated the bunker and set up an operation in the remains of the facility. Their goal? Recover all the pre-War combat gear stored in the VSS armory and whatever else they can get their hands on. However, despite Specialist Olin's expertise, they were unable to unlock the armory. It turned out that they needed to complete the simulation. To do that, they needed an external interface device: A PIP-Boy 3000. They did not have one, so they tried obtaining it. The Outcasts kidnapped a Gary clone (#23) from Vault 108. In a vain attempt to obtain his PIP-Boy, they tried reason and then outright sawed it off, but the salvaged PIP-Boy proved useless.[3][4]

It wasn't until the Lone Wanderer appeared that the Outcasts gained a chance at accessing the armory. Of course, the willingness of McGraw to employ an outsider to do the job put him an odds with Defender Sibley, a die hard hardliner of the Brotherhood, leading to a coup attempt once the armory was opened.[5] Although the Wanderer took valuable gear with him, many other technologies remained for the Outcasts to catalog and collect.[6][7]

The surface structure of the VSS facility was a major construction project. It was in its early stages of construction before the war, with just the steel girders, the building's skeleton, erected. When the nuclear holocaust came, it froze this place in time, construction stopped permanently. The Outcasts excavated the bare minimum and reactivated the elevator into the bowels of the facility.

The lift is surrounded by a security perimeter maintained by Outcasts under the command of Defender Morril. Their usual companions are super mutants infesting the area, which constantly harass the Brotherhood troops. 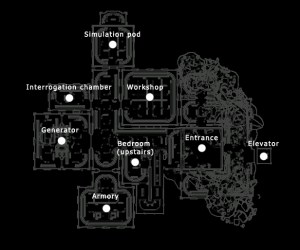 The subterranean levels of the facility fared better than the top, though not by much. Most of the underground area has caved in, though the bunker itself survived. The Outcasts excavated it, setting up floodlights in the ruined sections and restoring power to the bunker subsystems.

The bulk of their force is located here, alongside Protector McGraw, Defender Sibley, and Specialist Olin. The Lone Wanderer can access the workshop and the Outcast outpost terminals; VSS research terminal right off the bat, while other parts of the facility will require more effort. The armory will only open after completing the simulation, whereas the interrogation room with the dead Gary clone is locked with an easy lock.

After completing the simulation and accessing the armory, Sibley will instigate a mutiny against McGraw. As only McGraw and Olin remain friendly to the player, they can easily perish in the ensuing firefight. If she survives, Olin will repair the Lone Wanderer's gear.

Notably, followers cannot enter the bunker. They will be automatically assigned wait positions on the surface unless dismissed, though the precise place where they appear is fairly random. They might spawn amid super mutants.

The Outcast outpost appears in the Fallout 3 add-on Operation: Anchorage.