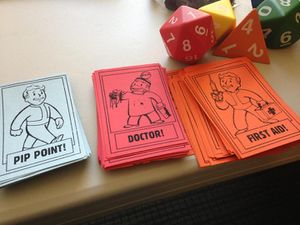 The game was first mentioned on November 14, 2013, by Chris Avellone who posted a photo of skill cards and dice and explained that those were "from the two Fallout PNP games at Interplay" not related to J.E. Sawyer's Fallout RPG.[1][2] On January 1, 2014, the team of RPGCodex posted more images of skill cards as well as explanation provided by Chris Avellone on how the system actually used to work.[3]

Little is known about the actual rules of Van Buren PnP. The game used dice and a specially designed set of playing cards featuring Vault Boy. The First Aid and Doctor cards represented how many times per session the player could use the respective skill depending on his/her skill level. The Pip Points were somehow similar to experience points: they were gained through role-playing and participation. The player could use them to re-roll a die if needed during the game session.[3]