The Van Graffs serve no one but themselves.

The Van Graffs are one of the largest merchant houses in New California, with operations as far as the Mojave Wasteland in the east.

Founded in Redding by Tiaret Van Graff, the Van Graff family has rapidly rose to prominence over the decades following the destruction of the Enclave, dealing in weapons and high value commodities, like gold. Their power was founded on loyalty and ruthlessness: Tiaret relies on her ten children (all from different fathers) to manage the most important branches of her mercantile empire and handle the most delicate assignments.[1] The economic clout of the family was one of the reasons the NCR had difficulty expanding north into New California.[2]

In fact, the Van Graffs have clashed with the Republic on numerous occasions, refusing to come under their thumb. Though it has often taken the shape of skirmishes, usually the Van Graffs used their wealth to pay the NCR off when defeat became inevitable and lay low for a while, allowing for the hostilities to die down.[3] Eventually, however, the Van Graffs could no longer face the NCR on equal footing. The Republic has grown large and powerful enough to field a massive army, dwarfing whatever force the Van Graffs could muster, no matter how sizable.[4] The solution was to expand their influence through other means, such as entering the New Reno market and contesting the Wrights' control over the city[5] and securing new markets out east, such as in the Mojave Wasteland. The Van Graffs established their branch in Freeside around 2276, under the leadership of Frieda and Gloria Van Graff. They took over the dilapidated Silver Rush casino. When the Kings protested, plasma weapons caused them to withdraw the objections, leaving the family free to ply their trade.[6] This naturally attracted the attention of the Brotherhood, but Elder Elijah's preoccupation with Helios One prevented the chapter from taking action.[7]

The general strategy in the Mojave is to maximize profits through official and unofficial deals, as well as undercutting the competition.[8] To this end, Gloria has formed a covert alliance with Alice McLafferty: In return for hitting competing caravan outfits, like Durable Dunn's or Cassidy Caravans, staging them as Brotherhood attacks, the Crimson Caravan Company would undermine the Gun Runners' market share, motivating clients to deal with the Van Graffs instead.[9]

Of course, Gloria has bigger ambitions. As the Legion was making entreaties towards traders in the Mojave, she contacted one of their representatives and agreed to provide them with energy based weapons.[10] Unbeknownst to the Legion, the deal was actually a set-up: Gloria has negotiated a deal with the NCR. She would draw the Legion's representatives into a trap laid by the Army, and the Army would start purchasing weapons from her in return.[11] This allowed her to overcome the hostility of the Republic to her family, earning her not only a big defense contract, but also connections in the NCR which could be leveraged to the benefit of the family.[12] If anything, the sheer profit made off the deal should be enough to convince the matriarch that cooperating with the Republic is a good idea.[13]

The Silver Rush, regional headquarters of the Van Graffs for the Mojave.

The Van Graff merchant house is a family business, with all the major decisions handled by the matriarch, Tiaret Van Graff, from Redding. Popular with men for her looks and money, Tiaret's long term growth policies have turned the Van Graffs into a true powerhouse.[1] The matriarch's ten children are managers and enforcers of the crucial branches of the mercantile empire, such as the Silver Rush in Freeside.[14] However, the mother usually has the final say when it comes to large scale deals, such as dealing energy weapons in bulk.[15] Unsanctioned deals are rare, but if they succeed, the matriarch is unlikely to take action against her children. Instead, she will use it to expand her influence and operations.[12]

The family relies on mercenaries to protect their operations and ensure smooth deals with clients. Largely considered thugs, the well armed and well armored men are there to deter thieves and catch those who are foolish enough to try their luck. They usually end up used as targets for energy weapons practice.[16] 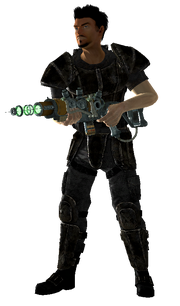 As a powerful merchant house, it comes as no surprise that the Van Graffs are hostile to their competitors. No matter how much they respect the business acumen of, say, the Gun Runners, managers like Gloria Van Graff are obligated to try to destroy them however they can.[17] Of course, there are exceptions: Caravan houses which do not directly threaten the business of the Van Graffs, due to non-overlapping markets can be profitable business partners for the Redding merchants. The Crimson Caravan is one such company, secretly cooperating with the Van Graffs to monopolize trade in the Mojave.[18] Powerful merchants are also potential partners for the Van Graffs, though some, like Robert House, end up beyond Van Graff reach.[19]

However, the largest opponent of the Van Graffs is the New California Republic. The family opposes the taxes and trade policies of the Republic, as well as the manner in which the Republic expands. Time was, the Van Graffs were capable of holding their own against the Republic military with their small army of well equipped mercenaries though every clash between themselves and the NCRA always ended with the Van Graffs paying Republic authorities off with their wealth when defeat became inevitable.[3] However, the growth of the Republic into a fully-fledged nation state has made such opposition unwise and the Van Graffs are forced to look for alternative means of opposing the Republic.[4] The situation is further complicated by the fact that the Van Graffs are operating in NCR territories by 2281. Being branded terrorists would complicate business quite a bit.[20] As a result, some of the branch managers, like Gloria Van Graff, have endeavored to strike deals with the NCR, acting as business partners, rather than enemies for the Republic.[21]

There is one entity the Van Graffs will not cooperate with: Caesar's Legion. While its might and the loyalty of its soldiers are impressive,[22] the fact that the Legion has only servants, not allies, makes any form of cooperation impossible. The Van Graffs only serve themselves.[3]

Helping Cass to find evidence against the Van Graffs will cause them to be permanently hostile to the player as long as Cass is the active companion, much like Craig Boone acts for the Legion. Killing Simon in a stealth manner helps make buying from Gloria easier. Completing Birds of a Feather will cause Gloria to mention having delivery jobs for the player, but this functionality has not been implemented.

Van Graffs have access to vast reserves of wealth, both monetary and material. Apart from access to high end pre-War energy weapons, they outfit all of their guards in first generation combat armor, painted black for brand recognition and intimidation purposes.[23]

The Van Graff branch in the Mojave specializes in energy weapons and has ruthlessly established a near-monopoly in such items. Their monopoly on these high tech weapons has made them a lucrative target for the Brotherhood of Steel, though they have remained largely unaffected by Brotherhood raids that hit Gun Runners caravans. The reason is simple: Van Graffs bring their weapons through northern trade routes connecting to Northern California, where their strongholds lie, while the Gun Runners, operating out of the Boneyard, have to travel the Long 15 and Interstates 93/95, which brings them dangerously close to Hidden Valley. The Brotherhood rarely passes an opportunity to hit shipments carrying what they see as dangerous technology.[24]

The Van Graffs appear in Fallout: New Vegas and J.E. Sawyer's Fallout Role-Playing Game, and were to appear in Black Isle's canceled Fallout 3.