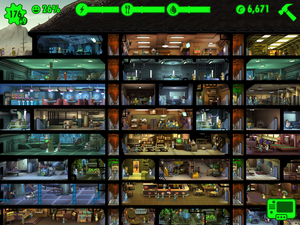 The Vault is the facility you control as the overseer in Fallout Shelter. Numbered anywhere from 0 to 999, it is made up of a number of integrated rooms, and it is your job to ensure its growth and maximize productivity.

The Vault is built on a 20x25 grid, with one ground level and 24 subterranean levels below, each subterranean level contains 20 available spaces. Most rooms can built next to a horizontally adjacent room and take 2 spaces. The elevator is the only exception, as build vertically adjacent to itself and takes only one space.

In order to access lower levels an elevator must first be built. Starting from level 4, you can encounter rocks, which have to be blasted apart using caps before any construction can commence. The cost is determined by the depth: It starts at 50 caps per rock, with an additional 25 cap fee per level.

The ground level contains the entrance, with a pre-placed Vault door (4 spaces), its entryway (2 spaces), and the pre-placed elevator (which can't be moved unless you destroy the entire Vault).

Removing rocks is generally something you only need to do when expanding the Vault. Save money and leave the poor silicates alone until you truly need the space.

Dwellers are vital to the survival of your Vault, as through them you are able to gather resources, fend off threats and based on their number new Room types unlock. Each new Vault starts with a Population of 2, depending on the number and level of living quarters you can subsequently increase that number up to 200.

There are three ways to get more Dwellers:

Beware as you get more dwellers, you'll need more clean water and food, and space. As you build more rooms to accommodate, you'll need more power. It is a balancing act, so before you start expanding your population, make sure you have the resources necessary to handle the increase.

Mister Handy was introduced on August 13, 2015. You can purchase them or get them on the lunchboxes. Mr. Handy does not count towards your 200 population limit. They roam around each floor back and fourth, therefore only 1 must be placed per floor.

Incidents can occur at random during your Overseeing of the Vault. Dwellers will react to incident in their assigned rooms, and you can send additional Dwellers to any room in trouble except children and pregnant women who will automatically run and hide when entering a room where an incident take place. Once the crisis is dealt with all assigned dwellers will gain some exp and return to their original occupation.

There are seven types of incidents that can occur: 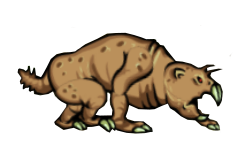 You can station two Dwellers in the Vault Door room to defend against Raiders. Additionally, the Vault Door can be reinforced to delay the raiders awhile longer until an appropriate welcoming party of armed Dwellers can be arranged.

Raider parties and Radroaches will become stronger the further you progress in the game (The more rooms that you have built), equipping your Dwellers with Weapons will help fight them off.