Vault 0 (zero) is a location in Fallout Tactics.

Constructed in Colorado, this installation was designed to be the nucleus of the entire Vault network. Protecting the greatest minds of the time, it was supposed to spearhead the post-War civilization of America. It would do so by executing the Exodus Protocol: reuniting the Vaults and then using Vault 0's sizable stocks of advanced machinery to tame the devastated land when outside temperature, radiation levels, and poison particle counts return to acceptable levels.[1][2][3]

To coordinate the effort and control the functioning of the Vault, the Calculator was created, an advanced supercomputer using an electro-organic terminal to link its central processing unit to brain stored in pseudo-cryonic conditions, fed specifically formulated nutrients to sustain suspended life. This scheme was intended to assist the Calculator in Vault management, including life support, food production and distribution, pacification robot protocol, and Vault-0 defenses. Ultimately, it would also aid in executing the aforementioned Exodus Protocol.[4]

However, these lofty goals were compromised. Before the war happened, the Committee responsible for managing the construction of Vault 0 introduced budget cuts (by a 30-3 majority, no less), reducing the sum allocated for computer backup systems from 24 billion dollars to 2.3 billion, to cover pay increases of senior committee members. Additional plans called for a modification of compartments that were designated for backup computer and life support systems into senior vault personnel leisure facilities, including several top quality restaurants with 10,000 square feet of cold storage, seven smoke rooms with piano bars and two subterranean hunting grounds stocked with rare animals purchased from world renowned zoos. The renovation had a projected cost of 12.4 billion dollars. All due to a “dwindling” chance of nuclear war ever taking place.[5]

On October 23rd, 2077, history proved them wrong. As the nuclear devastation reduced the United States of America to ash, the Calculator ended up in what can be best called a slumber. It did not react to the nuclear holocaust, instead silently remaining hidden beneath Mount Cheyenne, along with its robotic servants and pre-War charges slumbering in cryonic suspension. It slept for over a century.

It all changed in 2196,[6] when a group of supermutants from Gammorin's forces breached Vault 0's perimeter. This action activated the Emergency Pacification Protocol, designed as contingency in the event of substantial foreign military presence on US soil, dangerous mutations or breach in the Vault's defenses. The Calculator promptly introduced the invaders to a Behemoth and began executing routines included in the protocol.[7][8] The awakening of the Calculator also exposed the blunders made by the Committee overseeing its construction. The lack of backup computer systems impaired its functioning and damaged the electro-organic linking terminal. The results? Sixty three percent of Vault 0's population dead, with a further fifteen percent suffering from severe brain damage, to the point of being unable to care for themselves. Among the dead were First Scientist Napstarsky and Second Scientist Jones, the only people able to repair the damage.[9] Constrained by its inflexible programming and lack of actual intelligence, the Calculator coldly executes the Pacification Protocol, expanding its operations into the Buena Vista nuclear reactor complex and industrial facilities in Canyon City and Great Bend to augment the Vault's own production capabilities.

Thus begins a campaign of extermination against the wasteland and its inhabitants, stopped only when the Warrior penetrates the Vault and deals with the emotionless machine.

Vault 0 thus becomes the end-setting of Fallout Tactics, as the player character, the Warrior, and their team of Brotherhood of Steel Paladins have to stop the machine. The Warrior's squad comes to Vault 0 after triggering the nuclear explosion that opens the Vault door. 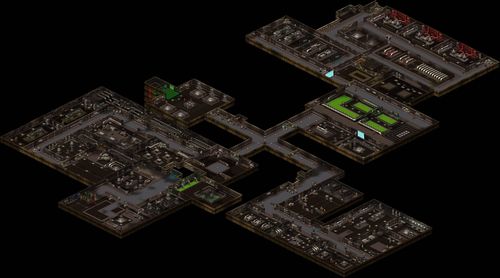 The mission in Vault 0 is to activate three power nodes throughout the vault in order to reach the Calculator. The players finally met the famous Dagger Squad of the Brotherhood, which consists of squad leader Paladin Lord Maximus, Tais, Maelyra, Khronis, and Phoenix.

Dagger Squad aids the Warrior in defeating the first wave of Vault protectors, and then secures the lift which is used to enter the Calculator's chamber. However, the Vault power nodes were rendered offline after explosion, so the Warrior has to activate them.

Going through security, living and cryonics sections of the Vault, the Warrior battles many robots and encounters remnants of Vault 0's citizens, who were revealed to be severely brain-damaged due to malfunctions in the cryonic chambers. Ultimately, the Warrior activates the power nodes and proceeds to the lift, entering the Calculator's main lair.

Vault 0 appears only in Fallout Tactics.

Vault 0 is designed to repopulate the continent if the other vaults fail. It contains the biggest "brains" of the time, and their genetic data.

The sturdy Vault 0 was to be the nucleus of the vault network. Housing the greatest leaders, artists and scientists, the inhabitants of Vault 0 were to reunite the vaults and lead the people to a new life, a new world. But, after the bombs, the world would be a harsh one. To ensure the creation of a post-nuclear utopia, the Vault Dwellers would need help. Machinery was constructed to tame a land hardened by the ravages of war, then tempered by nuclear winter.