Vault 0 is the second part of the nineteenth and final mission in Fallout Tactics.

This is the second major part of the final mission. The final area is shorter.

Once you arrive, you will be greeted by Dagger squad. The leader can be bartered with, though he doesn't have much more than 2mm ammunition. The area is broken down into four major parts: the entrance ("NW"), security ("SW"), cryogenics("SE"), and the power plant("NE"). All of them are heavily guarded by standard humanoid robots and security robots.

If you are using the Browning M2 on any of your characters, feel free to waste ammunition, there is a massive supply of it on this level. 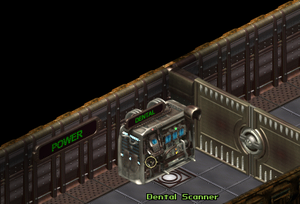 Dental scanner on which you'll use the severed head

Once the power plant is active, go back to the first room and activate the console by the elevator to move to the final area.