Vault 108 is one of the Vaults constructed by the Vault-Tec Corporation in the Capital Wasteland. It is located south of Canterbury Commons, and northeast of the Corvega factory.

Vault 108 began construction sometime in March of 2061, and saw partial completion sometime in December of 2069 due to work stoppage. Designed for 475 occupants and a lifetime of 38 years, the shelter was powered by a General Atomics nuclear power unit with a Steam Whistle mini Geo-thermal set providing backup. The armory was overstocked (triple the amount of gear) as part of the vault's overall experimental process.[1]

The premise of the vault's experiment was explained to study conflict for leadership and power in a given vault or similar setting. The vault overseer, Brody Jones, was known to have a genetic predisposition for a rare form of cancer that was expected to kill him within 40 months of the experiment's inception. Standard positions of authority in the vault went unassigned, and complete discretion was given to the overseer. The main power supply was also scheduled to malfunction after 240 months (20 years while the vault was planned to be sealed for 38), and the back-up power supply was intentionally insufficient to meet the vault's needs.[2] On top of all this, the vault was given three times the normal armory stock, and no entertainment recordings.[1]

However, doom to the vault came from a different direction than the experiment was originally planning for. An extensive and overly ambitious cloning experiment was undertaken by the dwellers at their own discretion, which created a series of fifty four clones, though imperfections in the process resulted in the copies eventually becoming insane and violent. When the observation rooms filled up, the scientists in charge decided to dispose of the clones... Which promptly turned them on their own makers, wiping out most of the vault's non-clone population, and forcing the survivors out into the wastes. The list of victims included Dr. Peterson, one of the first doctors to be injured by a violent clone.[3][4]

The clones were left to rot in the vault, with the sole exception of Gary 23, who was abducted by Defender Morrill for the Outcasts' excavation efforts at the Virtual Strategic Solutions, Inc. facility.[5] 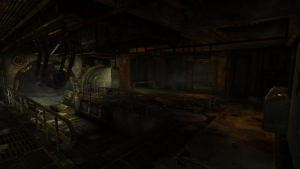 The entrance is standard as in any other vault, save for signs of bloodshed and deterioration. Mole rats moved in to occupy the abandoned halls, where the systems of the vault have still managed to function, albeit barely. The entrance section connects to the junction hall, where it seems as if a pair of dwellers made their last stand against the Gary clones, right next to the door to the living quarters.

Beyond the hall, down an access corridor, lies the power unit hall, still functioning after all these years.

The ruined living quarters of Vault 108 bore witness to the horror of the Gary uprising. They are little more than empty, ruined halls now, inhabited by junk and long-forgotten memories. 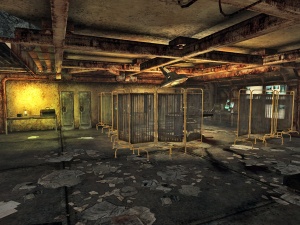 The decrepit medical labs of the vault are still inhabited by the surviving clones. Surrounded by ruined equipment, they are eking out a semblance of existence among the dead, both fresh and old.

There is a Pugilism Illustrated magazine that can be found on the counter in the cafeteria.

The Vault door may be found in the open position. There is a possibility that it may not be able to be closed. Pressing on the actual vault door will make it close and open.