Under the sprawling metropolis of Bakersfield, lies the technological magnificence of Vault 12. Built with every amenity in mind for the prospective Vault Dweller, Vault 12 was given the "Pressed Vault Suit" award for attention to preparedness. Buried far underground, the protection that Vault Dwellers will receive will be unprecedented. Much like all other Vaults, Vault 12 has been fitted with the newest in Vault Water Purification Systems. Able to take even the waste located in the sewers of Bakersfield, this system is able to deliver over 15,000 gallons of pure, refreshing drinking water every day.

Vault 12 is one of the Vaults constructed by the Vault-Tec Corporation. It is located in Bakersfield, California, in the post-War ghoul settlement of Necropolis.

Constructed under the sprawling metropolis of Bakersfield, Vault 12 was billed as "built with every amenity in mind for the prospective Vault Dweller," and that it had "been fitted with the newest in Vault Water Purification Systems. Able to take even the waste located in the sewers of Bakersfield, this system is able to deliver over 15,000 gallons of pure, refreshing drinking water every day." Those who signed on for this particular Vault took their preparedness very seriously, earning the "Pressed Vault Suit" award for their efforts.[1] The Vault's true purpose, however, was to study the effects of radiation on the residents. To ensure this, Vault-Tec designed the Vault door not to close.[2]

On October 23, 2077, the populace of Bakersfield learned that the other Vaults had been sealed. In desperation, they took to their local shelter, forcing their way in to protect themselves and their families. The door worked as designed: the radiation flooded in; those whom survived suffered from ghoulifcation.[3] In the summer of 2083, the survivors would leave the shelter. Those that chose to stay[4] founded the city of Necropolis.

By the spring of 2084, Set took control of Necropolis, wresting control from the original Overseer. He, not wanting to be killed, was driven north and lost to history. For the next seventy three years, Set would lead the city unmolested from outside parties. Instead, internal political strife caused some to leave, while a much more peaceful group was forced to take shelter underground.[5] Despite Set's disgust for the group, he reluctantly sent them whatever water they needed, fearful that he wouldn't have enough people to defend the city if it ever needed to be.[6]

Vault 12 is essentially identical in layout to the other Vaults encountered by the Vault Dweller. The first level contains the emergency medical lab and entrance, the second is the living quarters, and the third houses the recreation area, armory, and command center. The command center notably lacks the space for an Overseer which appears in other vaults - this is possibly because the Vault was never intended to be inhabited for a long period. Indeed, as the Vault has never been sealed, it is weathered through 85 years of exposure and lack of maintenance. Only the elevator and water purification terminal remain operable.

A number of glowing ones still inhabit the Vault. They can be evaded fairly easily by sneaking past, though they will attack the player if the water chip is removed before the water pump is repaired. This is one of the few occasions that glowing ones demonstrate to the player that they retain some of their mental faculties.

The water chip is located in the command center. It is easily spotted in the southeastern section of the level, as it is attached to the only operational computer.

If the first glowing one that one would encounter is left alive, and the water chip taken with out repairing the water pump, he will remain even after the other ghouls have died of dehydration, and comment on this fact. 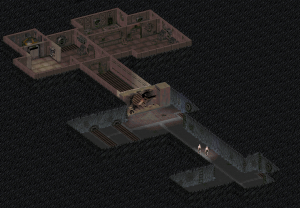 Upon entering the area, the player will encounter two glowing ones between the ladder where they entered and the Vault itself. The absence of the Vault door is a telling sign of what transpired here in the days following the Great War. Through the airlock and past the security door, the now defunct emergency medical lab can be found to the right, and the elevator to the left.

The command center is identical to the other Vaults in the region, with the exception of it missing an operations room and overseer station. This level is home to a total of six glowing ones: two can be found in the meeting room, one is in the computer core, and the final three are gathered around a dead body in the security office. Upon searching the storage room and security office storage, the player will find that the rooms were ransacked long ago, with no items remaining. Just past the security office, the water purification computer can be found. Upon interacting with the computer, the water chip will be removed. If the water pump has been repaired, it will be noted that the pump can be heard coming to life in the distance.[7] If the player so chooses, they can reconnect the water chip to the computer.[8]