Vault 13 is one of the Vaults constructed by the Vault-Tec Corporation. It is located in Southern California, due west of Vault 15 and the post-War settlement of Shady Sands.

Located in a scenic mountainous region, Vault 13 was designed to provide its inhabitants with an endless supply of pure water from a nearby underground river. In case of water table contamination, the government approved Vault Water Purification System would handle decontamination and purification, rated to work without significant loss of output for 250,000 hours (~28 years).[1] It was one of the last Vaults to begin construction in the west, with a cycle plagued by delays and problems.[2]

Within the Vault Experiment, the purpose of Vault 13 was to remain closed for 200 years, as a study of prolonged isolation. After the water chip forced Jacoren to improvise, the experiment was largely invalidated. However, it was then used as a control group for Enclave experiments.[3][4]

Vault 13's water chip began to fail some years before 2161.[5] Overseer Jacoren sent out the first explorers to find a spare. Ed was one of the first and perished not long after stepping outside the Vault door. Another was Talius, sent out with a shotgun. He was lost to the wasteland after he was apprehended by super mutants at Necropolis and sent for dipping.[6] When the water chip broke in December 2161, the situation became an emergency. With an estimated 150 days worth of water reserves left, Jacoren sent out the Vault Dweller on December 5, 2161, 7:21 AM.[7] The Vault Dweller returned in February 2162, after salvaging the chip from the Necropolis Vault 12.[8] However, he was immediately sent back out to find the Master and destroy him and the production laboratory that was being used to create the super mutants. The Overseer calculated, accurately, that the mutations were too uniform and the numbers grew too fast to allow for Vault 13 to remain safe and undiscovered.[9] 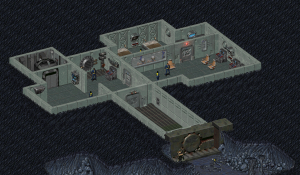 Airlock, EML, elevator. All one needs for leaving.

The entrance floor features the Emergency Medical Lab, with a medic on standby around the clock. It also hosts the main air lock, leading into the mountain's caverns through a four foot thick steel door, and an elevator leaving into the depths of the Vault. 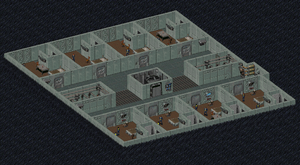 The living quarters are where the dwellers sleep and relax after a day's work. The rebel faction under Theresa is here, plotting how to leave the Vault.

The heart of all Vault operations. The terminals in the library can be used to gain 300 XP (Science may be necessary), while the security officer and Jacoren can provide access to the armory.

Vault 13 appears in Fallout and Fallout 2 and is mentioned in Fallout Bible, Fallout: Brotherhood of Steel, Fallout: New Vegas, and Gun Runners' Arsenal.