Vault 13 is one of the Vaults constructed by the Vault-Tec Corporation. It is located in Southern California, due west of Vault 15 and the post-War settlement of Shady Sands.

Located in a scenic mountainous region, Vault 13 was designed to provide its inhabitants with an endless supply of pure water from a nearby underground river. In case of water table contamination, the government approved Vault Water Purification System would handle decontamination and purification, rated to work without significant loss of output for 250,000 hours (~28 years).[1] It was one of the last Vaults to begin construction in the west, with a cycle plagued by delays and problems.[2]

Within the Vault Experiment, the purpose of Vault 13 was to remain closed for 200 years, as a study of prolonged isolation. After the water chip forced Jacoren to improvise, the experiment was largely invalidated. However, it was then used as a control group for Enclave experiments.[3][4]

Vault 13's water chip began to fail some years before 2161.[5] Overseer Jacoren sent out the first explorers to find a spare. Ed was one of the first and perished not long after stepping outside the Vault door. Another was Talius, sent out with a shotgun. He was lost to the wasteland after he was apprehended by super mutants at Necropolis and sent for dipping.[6] When the water chip broke in December 2161, the situation became an emergency. With an estimated 150 days worth of water reserves left, Jacoren sent out the Vault Dweller on December 5, 2161, 7:21 AM.[7] The Vault Dweller returned in February 2162, after salvaging the chip from the Necropolis Vault 12.[8] However, he was immediately sent back out to find the Master and destroy him and the production laboratory that was being used to create the super mutants. The Overseer calculated, accurately, that the mutations were too uniform and the numbers grew too fast to allow for Vault 13 to remain safe and undiscovered.[9]

Within a month, on March 3, 2162, the Vault Dweller destroyed the Master at the Cathedral, with extreme prejudice.[10] After another month and a half, on April 20, 2162, he killed the Lieutenant and destroyed the Mariposa Military Base along with the Forced Evolutionary Virus vats.[11]

After wandering the wasteland, the Vault Dweller finally returned on May 10, 2162. Jacoren greeted him outside the Vault. After congratulating him on his achievements, he brutally cast him out. Officially, it was to preserve the Vault. Unofficially, he was ensuring that the role of Vault 13 in the experiment would not be disturbed any more.[12]

The exile of their hero turned the Vault against the Overseer. After a group of Dwellers left the Vault in outrage, the Overseer was imprisoned, tried, and sentenced to death. It was believed that he caused the exodus by his careless actions and irresponsibly caused the death of many of fellow dwellers.[13] In order to avoid giving anyone this amount of power again, the leaders of the revolt replaced the overseer with a mainframe computer complementing the existing Think Machine. They bought it from the Brotherhood of Steel, turning the shelter into a fully automated installation.[14]

However, the revolutionaries did not know that the dwellers found their hero and made their way north, founding Arroyo.[15] What bound these divergent bloodlines was their reverence of the Vault Dweller. While it took on the form of a tribal religion in Arroyo, Vault 13 instead honored his memory with a shrine dedicated to his name and the establishment of the position of Keeper of the Shrine, responsible for upholding the memory of their hero.[16]

On May 15, 2242, the Vault computer suddenly received a coded sequence and declared that it was time to leave the Vault. Martin Frobisher, the informal leader of the dwellers, gathered everyone to watch the Leaving The Vault instruction video.[17] A day later, the Vault opened. Instead of freedom, the dwellers were attacked and enslaved by two Enclave Vertibird assault squads. Three dwellers were killed resisting capture, while the rest was herded into Vertibirds and transported to Control station Enclave.[18] The operation concluded on May 17, 2242, when the Enclave animal handlers deployed a unit of intelligent deathclaws under Gruthar to obscure the Enclave's actions and patrol the nearby area for stragglers.[19]

However, rather than carry out their orders, the deathclaws turned Vault 13 into their home. They carved out a nest for the den mother, Kerith, and took in various humans, not as prey, but fellow inhabitants. Although most learned to accept their unusual neighbors, there was one person who did not get along: Matt. The hacker destroyed the voice recognition module used by Gruthar to operate the main computer and disabled keyboard input. However, he was caught when he tried to unsuccessfully bomb the nest.[20] He was placed in custody while the remaining dwellers tried to fix the computer. Without the voice interface, the systems began to shut down one by one, starting with food and water processors. If power failed, the Vault would become a giant steel and concrete coffin.[21]

It is in this state of affairs that the Chosen One happened upon Vault 13. In exchange for the GECK, he repaired the voice recognition module.[22] Soon after, Frank Horrigan and his team invaded Vault 13, massacring the deathclaws and the humans living inside. There were no survivors. Only Xarn and Goris remained of the intelligent deathclaws,[23] while the last Vault 13 dwellers were imprisoned in Control station Enclave. They were freed in fall of 2242 by the Chosen One and founded New Arroyo together with their relatives from the tribe.[24] 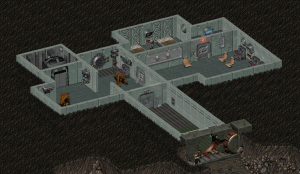 The facilities remain in roughly the same state as 80 years prior, deathclaws excepted, of course.

Eighty years later, the abandoned quarters are used by new tenants. One of the old technical sections was converted into a shrine to the memory of the Vault Dweller, maintained by a Keeper: Gordon.

Some changes are present

The rebellion that ousted Jacoren replaced the Overseer chair and quarters with an automated mainframe handling all of the duties. The wall in the armory has been removed, allowing the deathclaws to dig out a nest for their young and their mother.

The GECK is located in a locker in the storage room.

Vault 13 appears in Fallout and Fallout 2 and is mentioned in Fallout Bible, Fallout: Brotherhood of Steel, Fallout: New Vegas, and Gun Runners' Arsenal.