My life was very boring. I was raised in a Vault. I lived there for many years. Unfortunately, we were crowded and life was very bad. There was a schism, and many people left, taking with them the best equipment. Still, some of us tried to stay in the Vault. But then we were attacked. I was hurt, and I ended up here. Now I try to help people..."

This large underground shelter is one of the few vaults whose construction went smoothly and without delays, despite additional work poured into reinforcing the third level of the vault to ensure protection against earthquakes.[1] As part of the social experiment conducted by Vault-Tec Industries, only people of radically diverse ideologies and cultures were granted places in the Vault, to gain data on their interactions and potential failure over the 50 years it was planned to stay sealed.[2] When the Great War came on October 23, 2077, the dwellers reported to the Vault and entered it. The shelter was sealed. Contact with other Vaults was lost.[3]

As the years went by, the conditions within the Vault deteriorated. Population control was not implemented properly and by 2097, the Vault was overcrowded, with correspondingly bad living conditions. Conflict was imminent. In spring, the situation exploded.[4] There was a schism among the dwellers and the vault was finally opened. Most of the dwellers marched out, stripping the shelter of the best equipment, including the Garden of Eden Creation Kit. A small group stayed behind, trying to continue living in the now gutted vault.[5] The dwellers that left the Vault would eventually form distinct communities. The most significant of these was the village of Shady Sands, created with Vault 15's GECK.[6] The rest would band into raider tribes (the Khans, Jackals, and Vipers), terrorizing New California for years. The Vault itself continued along, until it was invaded.[7] The attackers used a shaped charge to breach the Vault door. The Vault was subsequently abandoned. Its condition deteriorated as the tremors caused the second and third level walls to give way to tons of rock, burying vital sections of the Vault. Wildlife and scavengers completed the destruction. When the Vault Dweller set out to find a replacement chip for Vault 13, the buried Vault was his first step and first disappointment.[8]

Even as the New California Republic formed in 2189, the Vault was left abandoned. The primary reason was arguments over excavation rights between the Republic and salvage teams, raiders, people worshipping the Vault, ghoul scavengers...[9] The largest problem manifested in the early 2240s. After the NCR abandoned Vault 15 following another excavation operation a few years before 2241, their old base was claimed by a group of wastelanders with nowhere to go, who formed a squat on the surface. When the NCR tried to reclaim the Vault and the vital computer parts within, they were stopped by the squatters.[10][11]

The reason for their obstinacy was twofold. One, Vault 15 was the only home they knew and if they yielded to the Republic, they would be homeless again.[12] Two, they were actually covering for a group of raiders, the New Khans under Darion. Darion promised the squatters that the Vault was being repaired by his men, to provide them with shelter, food, and water. However, in reality, all food and water was coming from Khan raids against caravans. The Vault was dead.[13] Darion also managed to plant a spy in the NCR Congress, giving him near perfect intel on the NCR.[14]

The situation was resolved by the Chosen One. Hired by President Tandi to retrieve the computer parts from Vault 15, he also managed to broker a deal between the squatters and the Republic. He would kill Darion and retrieve the parts, while the squatters would grant NCR access to the Vault in return for annexation, education, and supplies necessary to survive.[15] Successful in his mission, the Chosen One also vindicated President Tandi's policies of peaceful expansion, gaining the NCR a foothold in the northern wastes, while the squatters learned self-sufficiency and became productive members of society.[16][17] 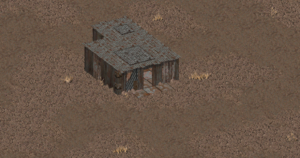 The only sign of the Vault is a rickety shack on the surface. 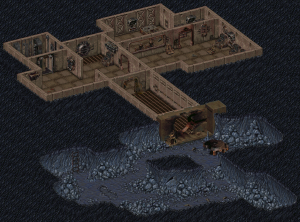 The entrance level has been gutted, with the Vault door blown clean off the frame. It's mostly infested with rats, ranging from the small ones to the molerat. To access the lower levels, the player has to use a rope on the ruined elevator shaft. 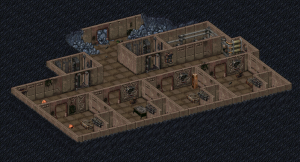 The quarters have partially collapsed, leading to a larger rat infestation. This level has plenty of loot laying on the ground. The elevator shaft needs another rope to proceed.

The command center is destroyed. Once the player approaches the caved-in section of the Vault, they will receive experience for discovering that the water chip is lost and they have to look elsewhere. 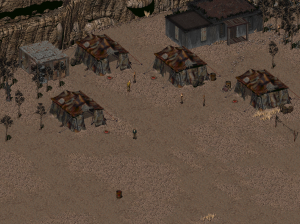 The squat is composed of a small, dilapidated building and several tents. The inhabitants offer the player a cold shoulder until they rescue Chrissy. Then Zeke will reveal the real problem, the Khans in the Vault. The player can convince them to accept NCR authority in exchange for the necessary education and tools.

The Vault's east outer entrance is guarded by Khans who are stationed at the nearby building. Chrissy can be found inside said building once her mother has asked the Chosen One to find her. 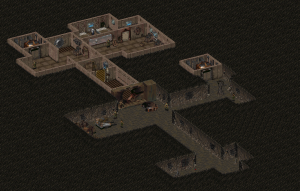 The Vault entrance is controlled by the Khans, who store here the spoils of their raids. The entrance has been secured with a forcefield emitter, which is offline until the power kicks in. Doctor Jones is also kept here as Darion's personal physician.

The living quarters hold the power generator for the Vault, which can be repaired to enable lights, prompting various hilarious comments from the Khans. There is also plenty of loot hidden in lockers, including radiation drugs, armor, and ammunition.

The command center has been excavated, cleared, and repaired. The security and computer center were adapted by Darion as his personal quarters. The storage room holds the computer parts the NCR seeks.

A terminal inside the library can put the location of Vault 13 on the player's map. The terminal in Darion's quarters provides the NCR spy holodisk instead, which can be turned in to Gunther in exchange for a major reward and NCR thanks.

Vault 15 appears in Fallout and Fallout 2 and is mentioned in Fallout Bible.