Designed as a green Vault, people selected for populating the Vault were all dedicated to one goal: Sustaining the Vault population with plants grown within its confines. Some of their most successful experiments were, in fact, donated by defense contractors, such as the fungus that would eventually become the Vault's undoing.[1]

Beauveria Mordicana was originally an entomopathogenic fungus designed for pest control. When a pest is exposed to the fungal spores, the fungus infests it and begins to colonize the host body. The host eventually dies due to failure of body functions, as the colony expands through its body. However, the dead body continues to be controlled by the fungal colony, allowing it to move around and infect more pests by spraying spores around the host body. While effective in the long term, it still takes between 10 to 20 days to kill its prey and achieves limited effectiveness when dealing with unsocial pests.[2] The fungus was originally developed at the X-22 botanical garden at the Big MT, though the technology was eventually shared with Vault-Tec Industries, to enable botanical experiments at Vault 22.[3]

As with many technologies coming out of the Big MT, the fungus was a Pandora's box. Once the Vault scientists began experimentation with the fungus after the Great War, they effectively signed their death warrant. While ostensibly designed to provide effective means of long-term pest control, the fungus was perfectly capable of infecting human bodies.[4] Fungal spores gradually spread through the Vault, slowly infecting the population. The first confirmed infection was Dr. Harrison Peters, who also provided insight into the development of the infection. It begins with pneumonia as the fungus invades the lungs, eventually transforming into chills, a fever, and a terrible racking cough. The fungal colony causes the body to actively reject anti-fungal treatments, leading to death due to organ failure. As with smaller pests, the fungal colony continues to grow and develop. Eventually, it spreads far enough to establish control over the deceased person's body, becoming a highly aggressive spore carrier, a mindless beast whose sole purpose is spreading the spores. The untreatable infection baffled the scientists and spread through the Vault like wildfire.[5][6][7][8][9][10]

The widespread infection led to a collapse of social order in the Vault. Infected humans were turned into spore carriers, with the airborne fungal spores threatening the remaining living. Scientists attempted to eradicate them by igniting gas deliberately released in the lower levels of the Vault.[11] However, the release triggered an incredibly aggressive reaction from the carriers, which attacked the scientists, tearing them limb from limb.[12]

By 2096, the Vault was finally was abandoned and a party of 118 survivors made way for the Zion Canyon. The dead eventually mutated into spore carriers or became stationary colonies of the fungus.[13][14][15] The dwellers were savages. They traveled to the Zion Canyon. With over one hundred men and women, strong discipline, tactics, and firepower, the small band of Mexican survivors camped out there posed no threat to the dwellers. They hit the survivors' camp on February 11th, 2096, killing all the men and shooting down women and children that resisted. The remainder was taken to the main camp of the dwellers and penned in like livestock.[16]

Randall Clark, the guardian of the valley, was desperate to help the Mexican survivors. Over the next two days, he surveyed the area. Vault 22 dwellers were organized well, with patrols and sentries set up along all approaches into the camp, except for the stream. The coughing among the dwellers puzzled Clark, but he ignored it as he prepared to save the surviving Mexicans. He went into the camp on February 14th.[16] What he saw snapped something inside him. The Vault 22 dwellers killed and ate everyone they took from the Mexican survivors' camp. Clark retaliated, waging a brutal war of attrition against them. With his rifle in hand and all the explosives he could use, he ambushed the dwellers where he could and booby trapped bodies and weapons he could not take.[16] By the end of February, he killed 24 dwellers in a cold, merciless campaign of vengeance. In the ten days it took to accomplish this, he only suffered one wound: a 10mm steel jacket round through the thigh, thankfully missing the femoral. Though he remained unseen by survivors, he was forced to move camp when on March 2nd, a small patrol nearly uncovered his camp in the cave when one of their men was caught in a deadfall trap. Panic fire almost hit him. After he disposed of the intruders, he moved camp to Cueva Guarache.[17] Victory came ten months later. After losing six concurrent Overseers and more than eighty members of the group to Clark and sickness, the dwellers gave up and fled the canyon, after eating their dead for nourishment.[18] History loses track of them past that point, maybe for the better. Occasionally, damaged PIP-Boys and jumpsuits from the vault would find their way into the hands of prospectors.[19]

The Vault itself fell into disrepair over the years, overrun by the plants and wildlife that thrived in the conditions within. The occasional scavenger quickly fell prey to the creatures dwelling within or the fungus, if they managed to survive. It wasn't until roughly 2281, when it piqued the interest of others. More specifically, Thomas Hildern, Director of OSI East. He has hired multiple mercenaries to retrieve the secret of the Vault, hoping to find a way to enhance the agricultural output of the NCR and stave off projected famine. Of course, the biggest benefit would be a major promotion for him. His latest hire, Keely, has gone missing much like the previous mercenaries, but this time, the situation is different...

The entrance of this vault is quite unusual. It is advertised with a sign that reads "Welcome to Vault 22" covered by "stay out! The plants kill!". The Vault door leads directly outside, unlike most that have a natural rock formation or tunnel enclosing the entrance.

Once inside the Vault, the Courier will come to a door that leads to a room with an elevator and stairs. From here on out, the player will encounter spore carriers, spore plants, and giant mantises throughout the Vault. The vault is split into five levels, the different floors can be accessed by repairing the main elevator within the Vault (requires repair skill of 50) or accessed by perpendicular staircases.

Immediately upon entering the vault, turn to the left to find a usable mattress, a duffle bag with some supplies, and one of Keely's terminals with entries 1 and 2. Next to the mattress hidden between two books is a Programmer's Digest.

From the entrance of the lab take a right and continue to the room directly across the hall to find one of Keely's terminals with entries 3, 4, and 5 in the series. 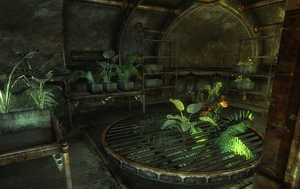 One of the food production/experimentation chambers

The key card to access the tunnels is located in the Common Quarters (the floor below). Once inside, an average locked door must be opened on the lower level in the northwestern corner of the room. Once inside, the first room on the left, on a shelving unit will have the 'Vault 22 Cave Door Keycard'.

From the elevator, go down to the hallway and into the first room on the right to find one of Keely's terminals with entries 6 and 7 in the series.

For the quest Bleed Me Dry, the Pile of giant mantis egg(s) will spawn in the caverns down a side tunnel guarded by a giant mantis female and several giant mantis nymphs.

From the entrance to the Commons, take a right over the little bridge and straight back to the billiard room for one of Keely's terminals with entries 8 and 9 in the series. The keycard that unlocks the door to the tunnels on the Food production level is found in the lower level of the Common Areas in the Quarters section on a shelf in the first room to the left. If the keycard cannot be found, check the floor near the shelf as it may have somehow fallen off. It is a darkish red/orange color.

Also found in the Commons, when you take the stairs down to the lower level and open the first door on the right. There is another room to the right and there will be a laser pistol on the table and a Flamer in the far corner. There are electrical flashes in the room.