Vault 8 is one of the Vaults constructed by the Vault-Tec Corporation. It is located in Northern Nevada, in the post-War settlement of Vault City.

Vault 8 was one of the seventeen control Vaults within the Vault experiment. It was originally intended to open after ten years, in 2087,[1] but its residents emerged early after receiving the all-clear signal in 2079.[2] With the help of their GECK, the Vault dwellers established Vault City outside of the Vault.[3] By 2241, the Vault was used as a medical center (quite possibly the best one in the Wasteland, outside of the Enclave or the BoS) for citizens, a power source (although the nuclear power plant could not sustain a large settlement indefinitely)[4][5], an information hub (the Vault's computers and archives), and a storage space for ore and other supplies essential to the well being of the city.

Inhabitants of the city rarely (if ever) venture into the lower levels.[6] Servants are tasked with keeping the Vault clean, but they are unable to prevent deterioration - some of the Vault doors are stuck and cannot easily be opened, while foreign items rattle in the air ducts. There is only one permanent inhabitant on the lower levels - Martin, who is a stuttering loner tasked with looking after the equipment in the Command Center. 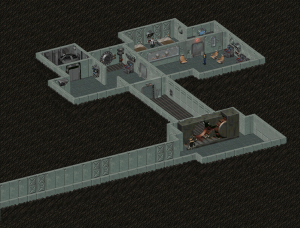 Beyond the massive outer blast doors and a long steel corridor lies a Seal-N-Safe Model 343 Vault door, together with a typical airlock and security door. A locker is located in the wall near the security door, containing emergency supplies for those venturing outside. The level's layout is standard for the region, with the emergency medical lab to the right of the entrance and the elevator hall to the left, as well as the ventilation hub for the level. In Fallout 2, the clinic houses the city's premier medical facilities, including cloning technology for replacement limbs.[7]

The emergency medical lab is manned by Dr. Troy, a fine physician, who can treat anything from crippled limbs, to poisoning, to radiation. He is a key figure in two quests, Deliver a sample of jet to Dr. Troy, and Find some endorphin blockers to make a cure for Jet. Should the Chosen One become a Captain of the Guard, Marcus can be treated by Dr. Troy to have all of the ammunition stuck in his body removed.

Assisting Dr. Troy is a young nurse, Phyllis, who can provide some insight into how Vault City functions. Male characters can choose to date her, donate sperm to Vault City (experience reward depends on their intelligence), and convince her to see the outside world. Female characters can only do the latter, though. Someone lucky enough to posses the Magic 8-Ball can access the emergency medical dispenser in the hall, for a super stimpak and two regular stimpaks.

The former living quarters are currently used as storage. The rooms are filled with crates and footlockers with a variety of equipment. Several of the doors are locked or are stuck closed. Vault City stores its supply of Uranium Ore for their nuclear power plant, as well as any other goods they trade with the outside. In an ironic twist, the crates in the living quarters contain a total of 420 spare water chips, of which one crate full was intended for Vault 13.[8]

To open the doors high strength is needed. Buffout and equipping a crowbar, or an electronic lock pick help a great deal. Exploration is worth it, as a great deal of valuable items can be found, and the citizens don't seem to mind at all.

A small reward also waits for the repairman who opts to repair the rattling vent, as a microfusion cell has found its way inside.

The heart of the Vault, the command center is home to its most vital facilities. This level is divided into two distinct halves by a door with a red light over it. For regular Vault dwellers, the most important locations are the meeting room, where they would have gathered for social events, followed by the library, where, on high resolution monochromatic screens, they can read all of the great works stored in the Vault's mainframe. Technicians, however, would be more interested in the computer core, located between the library and corridor leading to the elevator, where all the operations of the underground facility are monitored and vital functions controlled. At the intersection lies the Vault's storeroom, where all of the Vault's basic supplies are kept in lockers. A well supplied storeroom is a sign of a healthy Vault, even if it's no longer used by its inhabitants.

The second section of the command center is separated by a security door with a bright red light, beyond which lies the security office (where an armed security officer is supposed to be 24 hours a day) with the Vault's armory, which can only be accessed with clearance from the Overseer (at least technically). Just beyond is the main control room, where the central computer and primary control stations for the Vault lie together with the water processing computer. Last is the operations room, where the overseer's station is located.

Only Martin, a stuttering man, inhabits these halls, watching over the computers as ordered by the city authorities. To pass time, he sings to himself (Maybe by The Ink Spots - the intro and credits theme of Fallout). The Chosen One can compliment him on his singing for a small karma bonus or deride him for the opposite.