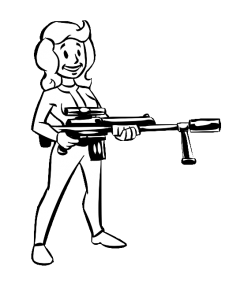 While Vault-Tec's Vault Boy is generally identified as the company's mascot, he is often joined (or replaced) by his equally popular female counterpart, Vault Girl.

Vault Girl is the female counterpart of Vault Boy, the Vault-Tec Corporation mascot, who sometimes appeared for female only perks or accompanies him in various images.[1]

The Vault Girl appears rarely contrary to the Vault Boy, and only for some representation of perks, reputations, traits and equipment. She also appears in a TV for educating cyberdogs in Big MT.