From The Vault - Fallout Wiki
(Redirected from Vault dweller)
Jump to: navigation, search
...

None could stand in my way. I had a mission. I had a goal. I had a really large gun.

The Vault Dweller is the player character in Fallout, and one of the pivotal characters of wasteland history.

The player is free to create a character of either gender, aged between 16 and 35, and focusing on any of the skills in the game. However, in subsequent games, certain facts have been established as canonical and this article serves as a summary of these facts: The canonical history of the Vault Dweller.

Originally, the Vault Dweller was just one of the hundreds inhabitants of Vault 13. Born in 2141[3] in the creche and raised by the community and one of the robotic caretakers, he left an unremarkable life in the Vault. His history was changed forever the day the water chip decided to give up the ghost and simply die. There was no spare parts or a possibility of a workaround system. With no better plan, Overseer Jacoren gathered everyone between the ages of 16 and 35 and made them draw straws. The Dweller pulled out the short one and was sent out to find the water chip.[4] He left the Vault the next day, on December 5, 2161.[5]

The Vault Dweller struggled for the first few days, fighting off rats and the elements. With only the location of Vault 15 to guide him, he struck out eastwards. On his way, he happened upon the small settlement of Shady Sands. He aided them and earned their trust. Tandi and Aradesh helped him, sharing their knowledge. After hiring Ian, the Vault Dweller continued on to the buried Vault. Exploring the ruins, he realized that it would not help his people: The control room and the water chip were buried under tons of rock. He moved on.[6] After fighting and saving Tandi from the Khans (inadvertently paving the way for the New California Republic's rise),[7] his travels took him to Junktown. His memories of the town would be tainted forever, as he learned the most important rule of the wasteland: Doing a good thing sometimes means being a very bad person. Yet he felt no remorse for his actions. The city of traders and traitors taught him many lessons, but it wasn't those that counted to him the most. It was Dogmeat, the loyal mutt who would be his most trusted friend for the time they were together.[8]

The Dweller continued on to the Hub, the largest city of New California. Bigger than both Junktown and Shady Sands combined, it was the most prosperous place he has seen outside the Vault, yet he felt that the citizens of the metropolis had no life, leading a desolate existence under the shadow of the powerful merchant companies. These same companies would help the Dweller, however, providing water to the Vault and extending the deadline for finding the water chip. A clue he acquired in the city led him to the Necropolis, the city of ghouls. There, he fought the super mutants and learned how it is to lose a friend, both for the first time. One of the mutants unleashed his flamethrower on Ian, burning him to death. The memory of his burning flesh would forever be etched into his mind. But Ian's sacrifice was not in vain, as the Dweller found the water chip and returned with it to Vault 13.[9]

Enemies of the Vault

The happiness of his return was marred by the report he logged with the archives. The Overseer ran calculations and determined that the mutations witnessed by the Dweller at Necropolis were too regular to be the product of random chance. He also berated the Dweller for sending the water caravans to the Vault, as in doing so, he revealed the location of the shelter to the wasteland. Combined with his knowledge of the mutants, the Overseer sent the Dweller out again. This time, he was tasked with wiping out the super mutant threat. In hindsight, the situation should have made the Dweller realize the true nature of the Overseer and the dwellers. But he soldiered on, loyal to the Vault.[10]

He picked up the trail, heading to the Hub. In the process of unearthing clues, he discovered Decker and the shady Underworld he led. Though he tried to manipulate the Dweller, the hero of the Vault managed to turn the tables on him and use him instead. In the process, he also saved brother Jonathan from Decker's goons in the city's old town. After leaving the town, he journeyed to the Brotherhood of Steel. Figuring they would have the knowledge he needed, he tried to join them, only to be sent on a fool's errand to the Glow. Faced with the horror of the atomic devastation, he refused to break and recovered the ancient Brotherhood disk sought by the reclusive order. Shocked to see him returning alive and well, they shared their knowledge and technology with him. Richer, the Dweller journeyed to the Glow, making a short stop at the Necropolis. He thought to visit old friends, but as soon as he entered the city, he realized that something went wrong. The super mutants attacked the city shortly after he left. A single ghouls survivor revealed that they were looking for the Dweller, right before he died.[11]

The ruins of Los Angeles stretched forever, skeletons of buildings baking in the hot desert sun. Within the city, he found many enemies and a few friends, learning more about the nature of the super mutants and the true foes. On March 3, 2162, he entered the Cathedral.[12] Stealing the robes of one of the Master's servants, he penetrated the depth beneath the monumental building. In the old Vault, walking among the misshapen ones, he confronted the most terrifying sight yet: The Master. He killed him in open combat.[13] All evidence of the Master and his plan was incinerated shortly afterward in nuclear fire.[14]

Only one target remained: The Vats. On April 20, 2162,[15] the Dweller invaded the Mariposa Military Base with support from the Brotherhood and Dogmeat, fighting his way to the heart of the facility. Though one of the forcefields claimed the life of Dogmeat, the Dweller managed to trigger the self-destruct sequence and put the Vats out of commission. With their destruction and the fall of the Lieutenant, the Unity was no more and he could return to Vault 13 a hero. On May 10, he returned. The Overseer met him outside the Vault door, thanking him for his service... And exiling him forever. All in the name of protecting the Vault. Bitter and angry, the Dweller turned his back on the 13 and never looked back. A group of Vault Dwellers, disgusted with the Overseer's decision left, led by Lydia, Theresa, and Lyle. They were never heard from again, leading the remaining dwellers to remove Jacoren from power and abolish the position of Overseer.[16][17]

Stricken with grief, the Dweller wandered the desert surrounding the Vault. He screamed. He cried. But slowly, he came to terms with his exile, but never forgave the Overseer for his betrayal. He cut all ties to the Vault, removing his jumpsuit on May 12 and never wearing it again.[18]But his concerns quickly faded, as he upon the group of dwellers that left Vault 13. He helped them survive in the harsh wasteland, saving their lives in the process.[19]

On July 10, the Dweller and his group, which now comprised both Vault dwellers and regular wastelanders, moved north. In the inaccessible canyons of southwest Oregon, they founded a village. The Dweller deliberately chose a location beyond a dry valley, surrounded by barren lands that would deter visitors.[20] Scouts were sent at first towards the old Vault, but gradually, that stopped in favor of strengthening the village.[21][22]

On August 18, 2167, the village was completed and named Arroyo.[23] The Vault Dweller, now the Elder of a tribe, taught his followers the basics of hunting, farming, and other skills. He also taught them the basics of engineering and science, so that they could maintain their homes and craft more to survive. And he found love: Pat. [24] On October 2, 2188, they were blessed with a daughter, the future village elder.[25] Twenty years later, on January 16, 2208, the Vault Dweller left Arroyo. He left behind his Vault suit, folded on the bed, and the memoirs. Nothing tied him to the village anymore after Pat's death several years earlier. A monthly cycle of mourning was declared, while his daughter prepared to take up the role of the village elder.[26]

The final years and legacy 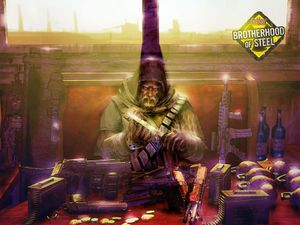 Appearance of the Vault Dweller in 2208.

The Vault Dweller was 67 years old by the time he left the village. As a veritable ancient, he was presumed dead by his fellow tribesmen and eventually died in the wastelands.

However, before his death, he traveled as far as the town of Carbon. As the wasteland stranger, he helped the people of the town avoid the raiders that attacked the city before continuing on with his travels. He always kept the Vault 13 flask with him, out of sentimental value, and even traded with the Initiate for it, on top of providing them with a Red Ryder BB gun.

Eventually, after a lifetime of influencing the wasteland, the Vault Dweller died. But whether it was by old age or by gun (or claw, or fang, or explosion...) is unknown. His legacy would live on in Arroyo, but more importantly, in the form of the New California Republic. A statue was erected to honor his role in saving President Tandi and securing Shady Sands, while the stories and legends about Vault 13 would become a core part of the folklore. Children and adults alike would search for Vault 13, the former as an imaginary play, the other to benefit from the riches within.[27] President Tandi would humor some of the expeditions, even. However, she never forgot how her father, Aradesh, and Seth perished in the wastes looking for the Vault.[28]

I always thought of Fallout's story of drawing straws was something the Overseer thought of. "Look, someone has to go outside, and they may die out there, so let's draw straws". Someone, probably not the Overseer since he wouldn't have gone outside no matter what, demanded that EVERYONE draw a straw in order to be truly fair. But to be honest, the vault dwellers were simply terrified of going outside, and terrified people do not always make the wisest decisions.

Anyway, when big dumb Larry drew the straw, maybe the Overseer saw a way to rid their limited gene pool of some really bad alleles.

The Vault Dweller is the player character in Fallout. He also makes a cameo in Fallout: Brotherhood of Steel and can be unlocked as a playable character.

Mentions of the Vault Dweller and repercussions of his actions are referred to in subsequent games and echo throughout the years.