Vengeance is a unique and very powerful Gatling laser in Fallout 3.

The following section is transcluded from Gatling laser. To modify, please edit the source page.

In contrast with the L30 Gatling laser, the UB-FRIED 3000 is not only fully automatic and with a much larger ammunition capacity, but was also mass produced. While the 3000 units entered service shortly before the war, they quickly became an important part of the arsenal of both of pre-War and post-War factions.

Vengeance has one of the highest DPS ratings of all automatic weapons in Fallout 3 and can handily slaughter most opponents. Like all Gatling lasers, it runs on electron charge packs. It additionally has the highest durability in the game, but this is quickly hampered by the Gatling lasers' unparalleled attack speed which quickly wears down on the weapons condition.

It can fire 3,129 bolts before breaking. That's about 13 full cells, or a whole two more shots than the normal Gatling laser. 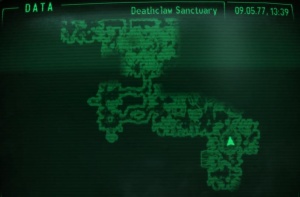 Vengeance can be found in the Deathclaw Sanctuary, which is located in a mountain, west of Paradise Falls near the Potomac, and southwest from Fort Constantine right next to Broadcast Tower KB5. The sanctuary outside has a small number of deathclaws, and around ten reside in the sanctuary itself. There is also usually an Enclave outpost close to the entrance, so beware. Vengeance is found in the southeast of the sanctuary, and is located next to or sometimes in what's literally a pool of blood, surrounded by a group of green mushrooms and mutilated human remains under a rock formation. The opening to the rock formation is facing away from your approach direction, so listen for dripping sounds, as water drips from the roof in the rock formation. Occasionally, it can be stuck under the mutilated torsos, which can be solved by shooting the body it is stuck beneath with a weapon such as the minigun or combat shotgun. Or, if one wishes to conserve ammunition, pick up the body and move it to the side, though sometimes this can result in the weapon displacing and dropping out of sight into the pool of blood. this can be solved by using Dogmeat's "Find me a Weapon" command.