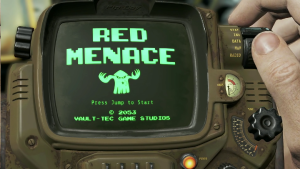 The video game Red Menace being played on a Pip-Boy 3000 Mk IV.

A video game is an electronic game that involves interaction with a user interface to generate visual feedback on a device such as on terminal or a PIP-Boy.

Prior to the Great War, video games were a rising medium of entertainment that saw moderate success in public, with video games holotapes being sold stand-alone or being included in magazines to entice sales.[1] Dedicated companies[2] and divisions of companies[3] were created to develop video games in an attempt to get a foothold in this burgeoning market. Video games spanned a wide spectrum of genres, including strategic defense,[4] platforms,[5] and text adventures.[6] Video games were also utilized by the United States Armed Forces in the form of Virtual Reality simulations, such as for training pilots in aerial dogfights tactics[7] and training soldiers in past battles.[8] Vault-Tec also used virtual reality for some of their Vault experiments, most notably in Vault 112 where the overseer and all residents have been in a simulation for over 200 years.

Video games (and in turn video game players) are often looked down upon for being childish and generally a complete waste of time with no redeeming social value.[9] However, even if video games are largely useless, they can pass the time and offer a distraction from the reality of a hellish post-apocalyptic wasteland.