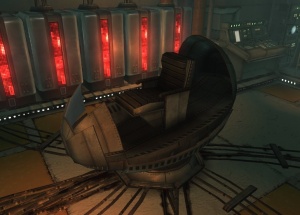 Virtual reality or VR simulators were a fairly new technology before the Great War and are known to have been in use only in the United States Armed Forces and in at least two Vault-Tec Industries Vaults.

There are three ways known to achieve virtual reality, the fist, and most common method, are the Visiontrons, which encase the user in a pod, put them on life support and has a screen come down in-front of the user's face and beam the simulation into the user. Interestingly, the extent to which the Visiontrons, for lack of a better word, "simulate" reality is unknown- in some cases, being killed in the simulation results in the person being killed in real life. It is possible this is only an extreme case, (as it is a fail safe in Vault 112, and a method of unlocking an armory in the VSS Facility.) Since, as previously stated, these simulators are known to have no civilian or entertainment applications, the question remains whether they were part of a previous training simulation or other project, possibly involving the development of power armor. Again, due to the limited information available since the bombs fell, this may never be known.

The other known and least common ways VR is achieved are through VR rooms, which were experimental and only used at Big MT during testing, and the SimTek 5000, a desk mounted display that the user puts to their eyes and controls movement and other actions with a joystick on the side. It is possible that the SimTek 5000, and possibly earlier versions of, are the limited civilian versions of virtual reality, while the Visiontron and VR rooms are the military applications of virtual reality.

There are at least six known sites with VR simulators - Vault 13's SimTek 5000 used to simulate the outside world for preparation for leaving, Vault-Tec's Tranquility Lane simulation in Vault 112 (run by Overseer Stanislaus Braun as part of the Vault Experiment), Virtual Strategic Solutions, Inc.'s Anchorage Reclamation simulation in the VSS Facility (now known as the Outcast outpost), the Flight Simulators at Nellis Air Force Base, the VR simulators in the Brotherhood of Steel Hidden Valley bunker and the broken VR room in the X-13 research facility at Big MT.

The simulator at the VSS Facility is labeled "SIM-U-TEC Chamber 003", suggesting that at least 2 more simulators were built by VSS Inc. Whether these were functional is unknown. It is possible that there are simulator rooms behind the doors; you see them when you go down with the elevator.

Nellis Air Force Base near Las Vegas used virtual reality simulators to simulate flying and aerial combat to train pilots.[1] After the Boomers settled there, they began to use the simulators for the much same purpose,[1] hoping to one day recover and refurbish a bomber and put the training to use. The Hidden Valley bunkers are also equipped with several VR pods, and are used by the Brotherhood of Steel to train initiates due to the lockdown in Hidden Valley and can be assumed to have been used to train soldiers before the Brotherhood of Steel's occupation.

In the X-13 Research Facility at the Big Mountain Research and Development Center, there is a VR room that could presumably run a virtual reality setting without the use of a pod allowing for free movement and a more immersive setting; however, the VR room was destroyed by one of the Big MT staff as, according to the VR simulation note, was responsible for the deaths of several staff at X-13 leading to the assumption that use of the VR room was very dangerous and had no limitations to which it simulated or either just went haywire.