From The Vault - Fallout Wiki
(Redirected from War Department)
Jump to: navigation, search
...

This article is a summary of the known information concerning the appearance and activity of the United States' federal government and its successor, the Enclave, in the Fallout world. 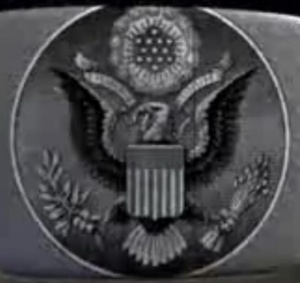 Great Seal of the United States at war bonds advertisement

The President of the United States was mentioned in the Fallout games as well as some federal departments, listed as follows:

Federal Courts were mentioned in the Tibbets design document.

There was a covert branch of the legal U.S. government that acted as a shadow government,[39] and intended to launch a coup d'état against the real U.S. government. It was called the Enclave. Its members also acted as lobbyists for major American corporations like Vault-Tec, General Atomics International and RobCo.[3]

In March 2077, with the United States government prepared for a nuclear or biological attack from China, the President of the United States and the government and corporate officials who made up the secret shadow government known as the Enclave retreated to remote sections around the globe and made contingency plans for continuing the war against the Chinese.[40] These plans presumably included provisions for the continuity of government and preservation of the line of succession.[41] Meanwhile Vault-Tec and the federal government would survive on the mainland.[42]

According to the Fallout Bible presidential powers accorded to the leader of the Enclave were as follows:

In the year 2220 Congressman Dick Richardson was elected president for his first term of four years (he would be elected to five), through the aid and political pressure provided by his father, a previous American president under the Enclave. It is not certain that if Dick Richardson was the president in 2241 he was also the one elected in 2220, over twenty years before. However it was possible, if under the Enclave a president could be reelected more than once to a new term. This would have been legal if the Twenty-second Amendment to the United States Constitution had never been passed in 1951, a real possibility in the divergent Fallout universe.[53]

There was a cabinet mentioned also. It was the addressee of the Project report from the United States Chemical Corps and the Power Plant Operations report from the Enclave's Atomic Energy Commission. Its seat was the Executive Office on Control station Enclave.The only known cabinet-level executive officer in the Enclave was the Vice-President of the United States, the first person in the presidential line of succession.[54]

There were some executive agencies present after the Great War, like the Secret Service, the Atomic Energy Commission,[55] National Aeronautics and Space Administration (also referred to as the United States Space Agency)[56] and the Environmental Protection Agency.[57] The United States Armed Forces were present and its Enclave Patrols at the Navarro perimeter also acted as border police.

No information about this branch of the American federal government under the Enclave has been provided in the games, except the for the fact that courts-martial were performed by officers of the Enclave's armed forces (as in the real world American military).[58]

Possible candidates for acting commander of the Enclave armed forces following the death of President Richardson and the destruction of the oil rig were Enclave military officers who could have survived the destruction of the oil rig, e.g. those on the Enclave's mainland outposts' senior staff, Enclave Control Company's senior personnel or some Enclave military officers who might have evacuated in Vertibirds from the rig or had been deployed on outside missions.[63] The commander of the remaining Enclave military forces was Augustus Autumn, who had risen to the rank of Colonel by 2277.[64]

A new President of the United States appeared, John Henry Eden, from the Raven Rock military base on the East Coast in the Capital Wasteland near the ruins of Washington, D.C. Despite the fact that some of the remnants of the Enclave government had survived[65] after the destruction of the Enclave's oil rig in 2242, according to Colonel Autumn, Eden was next in line for leadership. President Eden then ordered Colonel Autumn to relocate the Enclave's military forces from California to the Raven Rock base. Before the destruction of the Enclave oil rig, John Henry Eden had served as an adviser to many of the American presidents of the Enclave. He was probably a remote adviser in fact, because he was not actually human but a Pre-Great War artificial intelligence permanently located in the Raven Rock base within the ZAX supercomputer unit there.[66] It is not certain if Eden was a member of President Richardson's cabinet.[67] According to President Eden's propaganda broadcasts on the Enclave Radio a new presidential election was promised to the surviving people of the United States, but without going into the details for "reasons of national security." Eden also promised to surrender the office of the Presidency to the winner of this election - without stating the exact time when this would occur, however. According to some speeches made on Enclave Radio there was still some form of Congress in the Enclave as well. The only person aware of President Eden's true identity as an AI was Colonel Autumn.

The real-world constitutional provision that lays out the structure of the executive agencies of the executive branch of the federal government is the United States Constitution, Article Two, Section 2, Clause 1: "the President may require the Opinion of the principal Officer in each of the executive Departments, upon any subject relating to the Duties of their respective Offices". As the timeline Divergence occurred in the 1940s or 1950's, it can be assumed that the U.S. Constitution in the Fallout universe was identical to the real-world document up to the Twenty-first Amendment. Beyond that point, the content of the Fallout version of the Constitution is wholly unknown.