Watch out for radioactive hot spots. This place obviously sustained a direct nuclear strike, and secondary cascade radiation may be bad. I'd recommend avoiding this place completely if we can.

The West Tek Research Facility, colloquially known as The Glow or Great Glow after the Great War, was founded in 2055[1] as the primary biological research installation for West Tek, later expanded to accommodate advanced weapons labs. The Glow can be found eight squares east and twenty-four squares south of Vault 13.

Initially divided into two sections, "Advanced Weapons" and "Biomedical Sciences Research",[2] it was the single biggest private contractor of the American federal government by 2069,[3] with its biggest project being the T-51 power armor for use by infantry soldiers on the frontlines. Its second-largest was the Pan-Immunity Virion Project (PVP), later known as the Forced Evolutionary Virus (FEV). In 2076, the research facility was secured by a military contingent for fear of international espionage, shortly afterwards, the PVP research was moved to the Mariposa Military Base where experimentation on human subjects would continue.[4] Several other projects were also being pursued, including energy weapons and upgrading existing armor.

The West Tek Research Facility was destroyed in the nuclear holocaust of 2077. During the Great War the surface of the installation took a direct hit from a nuclear warhead which left a gaping hole exposing the subterranean installation, shattering the F.E.V. containment tanks and releasing the irradiated virus into the atmosphere.[5] Mutated by radiation, the airborne F.E.V. strain did not have the same mutagenic abilities as its counterpart at Mariposa, but still complicated things for the Master later on. Due to its high radiation, the facility came to be known as the Glow, surrounded by legends among the people of New California. Shortly after the Great War, in late 2077,[6][7][8] a faction led by Sergeant Dennis Allen gained strength during the Brotherhood of Steel Exodus from Mariposa, and urged the Elders and Captain Roger Maxson to let them explore the ruins of the West Tek Research Facility for artifacts. No permission was given. Allen and his group split away, taking some technology and weapons with them. Allen, together with Soto, Jensen and Camarillo arrived at the Glow after several weeks of travel. Upon arrival, they started exploring the ruins, but were promptly chewed apart by security robots and radiation when they breached the lower levels and weren't recognized as authorized personnel.[9]

The Brotherhood of Steel used to send unwanted applicants to the Glow on a "fool's quest", referring to it by the moniker the "Ancient Order", just to laugh about it later when they ended up dead because of the high amount of radiation in the area. They were quite surprised when one known as the Vault Dweller actually made it back, bringing with him a holodisk that recorded the fate of Allen's expedition, and earning him a place in the Brotherhood.[10]

It is important to note that the Glow, true to its name, is one of the most highly irradiated locations in the Fallout universe. Rumor has it that "all sorts of mutant freaks" guard the technology from before the war,[11] but the radiation is even better at guarding the technology; a few moments' exposure is enough to give a human a lethal dose of rads. Use of Rad-X to boost radiation resistance to 100% is widely considered absolutely necessary to survive a trip to the Glow.

Some time after 2162, some ghoul survivors from Necropolis settled north and west of the Glow, and founded the town of Dayglow, whose inhabitants formed partnerships with scavenging companies from New Adytum and the Hub and have built quite a profitable corporation from their salvage efforts.[12]

The color of an arrow indicates which pass key is needed to access which parts of the facility. 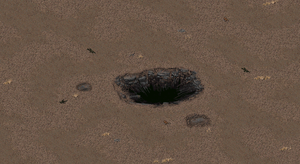 You need to prepare a rope before venturing forward.

The surface of the facility has been wiped clean by the nuclear strike, with just a gaping crater where the entrance elevator would be. Hardened armor plating used to provide an additional level of protection for the facility below are visible where the wind has stripped away the sand and rock. Bodies that surround the crater are all that remains of would-be explorers and are empty.

Players should take two doses of Rad-X as soon as they enter the map, as the character starts soaking up radiation the moment they arrive. Party members are not affected by radiation mechanics at all.

To enter the facility, players need to use rope on the protruding beam. It's also recommended to watch the clock, as the two doses of Rad-X and the 100% radiation resistance they grant will last 24 hours. Hacking and reading books consumes time off that clock and it's possible to suddenly run out of radiation resistance and promptly absorb enough radiation to keel over and die. 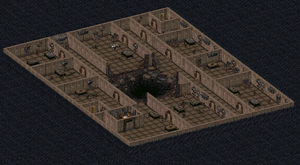 The blast penetrated the surface and destroyed much of the level.

The administrative and office level. Players enter it where the entrance elevator would have been. If seeking Sergeant Dennis Allen for the Brotherhood, his body is located in the room just next to the entrance, but to reach it, the player has to circumnavigate the level. Most bodies and nearly all lockers contain loot and it's worthwhile to recover them. The room in the northeastern corner has a stuck door which can be opened if the character's ST is 8 or if the sum of their ST, AG and LK is at least 18.

Sergeant Allen is the sole body in power armor. On him is a yellow pass key and the Ancient Brotherhood disk required to become an Initiate. The sole functioning terminal can be used to turn on emergency power for the facility, which activates the elevator in the southwestern corner that grants access to the lower level. The card disables the electric trap and opens the door, but the player can use Traps and Lockpick to gain access regardless. 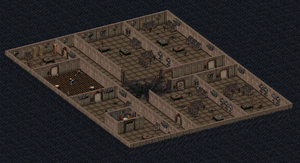 The second floor includes numerous computer laboratories and tables, as well as the first encounter with a security checkpoint. The robots are deactivated as long as the main power generator for the facility is not turned on and can be destroyed at leisure. The lockers in the security section contain a variety of loot, as do the bodies.

The most important item here is the red pass key, on a body in the northeastern chamber, required to access the higher security elevator. 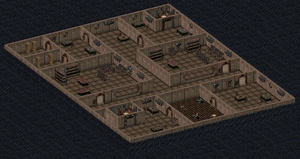 Connecting floor. The shelves are empty and do not provide any loot.

A weapons research and development level that doubles as a connection between the upper floors of the facility and the higher security levels below. There's another robot checkpoint here, together with a large stash of weapons in the lockers to the northwest. The red elevator is in the northeast, granting access to two more levels of the facility. 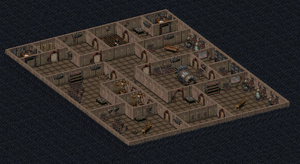 The western elevator cannot be accessed without the power being turned on.

The heart of the facility, housing an intact artificial intelligence, ZAX 1.2. Although effectively an amputee, with his robotic servants inactive, labs destroyed, and sensors mostly burned out, ZAX continued his silent vigil. Players can chat with him if they have Intelligence 5 and can download numerous files, including power armor specs, West Tek records, and play chess (this option was supposed to grant 700 experience on a critical success while performing an Intelligence check; attributes do not generate critical successes, so players can only lose). Playing chess advances the clock by two hours and doesn't affect ZAX's attitude at all.

ZAX may unlock access to the weapons locker by the high security elevator in the west. If power is turned on and the player has at least 40% Science skill, they can use ZAX to shut down the security bots across the facility (they reactivate when the generator is activated). Failing to do so advances the clock by 5 hours; success only advances it by 10 minutes. 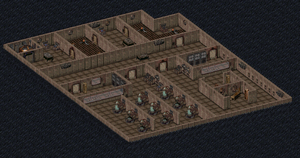 A treasure hoard and a major piece of New California's history.

The most secure part of the facility and one that cannot be accessed without turning on the power using the generator on the lower floor. There are two security checkpoints here with active robots (unless they were deactivated through ZAX) and a plethora of loot in the lockers in the southeastern laboratory, together with a full set of combat armor, energy weapons, and a lot of ammunition. There are also several lore holodisks to collect from the lockers. Merely entering the level grants 1000 experience points for cracking the mystery of the Glow. 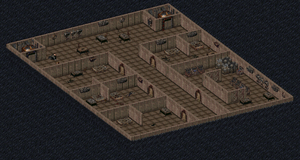 The deepest floor for military and research personnel, together with the primary power generator. Reactivating the generator requires using Repair on it (or a Tool). Players can attempt repairs once, any subsequent attempts require Repair 36% at a minimum. Reactivating the generator completes the second quest of two associated with the facility (the first one, deactivating the traps, cannot be completed) and grants 1000 experience points on top of unlocking access to level 5 and reactivating all dormant robots. Destroying them beforehand is recommended.

Notably, one of Dennis Allen's followers lies dead in one of the rooms.