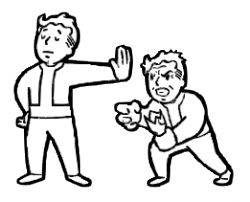 Yielding is an action possible in Fallout 3, Fallout: New Vegas, and Fallout 4 where if the player is to initiate combat with a friendly NPC, either accidentally or on purpose, they can un-initiate combat by holstering their weapon within the first 10 seconds of combat. If the NPC accepts the yield, they will holster their weapon as well and go about their schedule. After the 10 second limit is up, the NPC can no longer be yielded to.