From The Vault - Fallout Wiki
(Redirected from Zetan)
Jump to: navigation, search

Zetan[1][2] aliens are an extraterrestrial yellowish-green humanoid race from an unknown planet. The only thing known about them is that they use their ability of space travel to study other planets and species.

They seem to have a strict society focused on work and progress, with no apparent concern for hobbies and personal pursuits. Their architecture is spartan and purely functional - for instance, their beds (called stasis chambers) are sterile metal capsules with no mattress, blankets, sheets, or other pieces of bedclothes typically found in a normal human bed, and no discernible means of entertainment can be seen aboard Zeta. However, the aliens, in their own right, appear to have some degree of emotion since alien workers display obvious fear when confronted with armed assailants. In another notable case, the aliens are shown to have an unusual fascination with Giddyup Buttercup, as demonstrated in a captive recorded log onboard Zeta, of Sally being taken to the recording room and noticing a Giddyup Buttercup. She notes that upon her calling attention to it, the aliens become very excited, though she has no idea why they act this way.

They view other species as laboratory animals, worthy of preservation and storage at best and vivisection and experimentation at worst. They speak in their own language of high-pitched screeches and wails. As such, verbal communication between humans and aliens is impossible. This isn't helped by the fact that, barring recording some brief biographical information, the aliens simply aren't interested in discussion.

They are incredibly advanced in their variegated technological fields, capable of spaceflight and technological feats equal to but often beyond that of even the most advanced human pre-War technology. They also possess technical faculties such as long-term cryostasis, powerful rayguns, genetic engineering, teleportation and holograms. However, they are totally dependent on technology, and are physically limited by their extreme use of it. Because of this, they are physically fragile, lacking in raw strength, are ineffectual in melee-based combat, and don't possess especially protective armor and clothing.

Aliens typically wear spacesuits, the color of the suit apparently indicating rank, and soldiers generally carry shock batons, disintegrators and atomizers. They prefer to attack their foes in large numbers, and tend to have guardian drones with them. 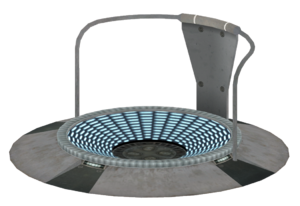 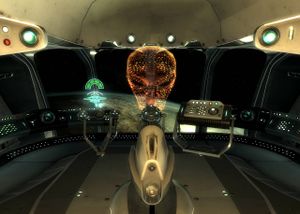