Zhu-Rong v418, developed under the codename ZRIN by L.O.B. Enterprises, is a man-portable incendiary weapon built on the basis of a standard Shanxi Type 17 sidearm. The key component is an acumist barrel, replacing the standard one. Upon pressing the trigger, a standard 10mm round is fired and partially liquefied by the barrel coating. Upon impact, it liquifies entirely and delivers incendiary damage. Retardant jacketing and internal heat diffusers protect the operator's hands and fingers from injury. These properties give it superior accuracy and performance over other ZRIN prototypes, enough to qualify it as a production candidate.[1]

Earlier prototypes were much less successful. ZRIN-363 weighed 118.3 kg and emitted dangerous fumes.[2] The next model, ZRIN-375, used a proprietary ammunition type based on the 10mm round. However, the caplet with amalgamating agents, while creating spectacular firebursts and shrapnel projection in line with the project requirements, it proved excessively sensitive: Ammunition could explode due to vibration produced by simply walking.[3] The penultimate functional prototype, ZRIN-401, rectified all of these problems, by using standard 10mm ammunition and using an acumist barrel to superheat the projectiles, but the lack of heat protection meant using it for prolonged periods of time was hazardous to the operator.[4] 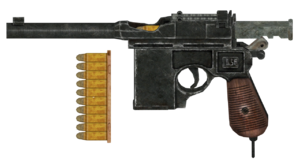 The Zhu-Rong pistol does the same low amount of damage as the regular Chinese pistol but has a slower rate of fire. Although its damage might not be quite on a par with other more powerful sidearms, the Zhu-Rong v418 has incendiary properties, dealing some fire damage upon hitting a target. It has the longest range of all incendiary weapons, aside from the heavy incinerator. Enemies killed with this pistol will often explode into dozens of flaming chunks.

The Zhu-Rong is able to fire 1659 rounds (about 166 magazines) before breaking.

The Zhu-Rong pistol can only be found in L.O.B. Enterprises. It is found behind a Very Hard locked door (requires a Lockpick skill of 100) in the CEO's office in the case on his desk. The key for the case is inside his desk. It is also possible to reach the case by working the Lone Wanderer's way around the edge of the destroyed top floor until they are on the other side of the locked door.