I pray for the safety of all good people who come to Zion, even Gentiles, but we can't expect God to do all the work

Zion Canyon is a part of the former Zion National Park. It serves as the game-world for the add-on Fallout: New Vegas add-on Honest Hearts.

The caves of Zion National Park was the site of several United States Geological Survey research stations that were abandoned during the Great War.[1] The canyon was spared most of the horrors of the Great War, and remains an unspoiled wilderness. In the immediate aftermath of the war only one man is known to have inhabited Zion - a survivalist by the name of Randall Clark who used the Fallen Rock cave USGS research site as shelter from the radioactive fallout. According to him, a black rain fell on Zion a little more than a week after the war,[1] followed by green and glowing snowfall in January 2078 and Zion was safe to explore for short periods by the end of January.[2]

Once it was completely safe to wander outside, Clark began to camp out in the park, and slowly lose his mind. In September of 2095, a group of Mexicans came to the area, calling it "paradise." Clark watched the Mexicans, never making contact but subtly aiding them when they needed it.[3] In 2096, a group of Vault 22 dwellers, infected with Beauveria mordicana, arrived in the area, killing and eating the Mexicans, with Clark unable to rescue them. Out of a sense for vengeance, Clark conducted an ten month long campaign of seek-and-destroy operations on the vault dwellers, killing most of them or waiting for them to die of their infection.[4][5] However, not all the vault dwellers fell at the hand of Clark and he befriended Sylvie, who was caught in a bear trap, and ended up having a child with her. She died during childbirth from an overdose of meds and the child was stillborn.[6]

In 2108, feral ghouls arrived in the area, but Clark was able to kill them all before they became a problem.[7] Fifteen years later, in 2123, a group of children arrived in the area, in the same location where the Mexicans had encamped all those years ago. Clark, now an old man, watched over the children as he did with the Mexicans, making sure that no harm came to them but never making contact with them. To the children, he was "the Father in the Cave", a purveyor of gifts and dispenser of wisdom.[8] Clark died at Red Gate, leaving behind Survivalist hidden caches in caves which are full of traps.[9] The children became the Sorrows, a peaceful tribe that embodied innocence, and lived in peace for years, never venturing into the caves and treating all pre-War buildings and tech as taboo.

The peace was not to last. Recently, missionaries from New Canaan in the north have arrived in the region, attempting to convert the locals to Mormonism.[10] That in itself would not have been a threat to the peace, but the White Legs, a hostile group with whom the Mormon Church is embroiled in a conflict, have followed the surviving Mormons down to Zion, where the Sorrows now face extinction. Daniel and Joshua Graham, ridden with guilt over their part in the Sorrows' current predicament, have vowed to protect the tribe by any means. Daniel wants to evacuate the Sorrows to the Grand Staircase, where they cannot be followed by the White Legs, and thus abandoning their traditional home. But Graham, with his Dead Horses, want to teach the Sorrows the art of warfare so that they may drive the White Legs out of Zion and secure the region for future generations. Either option will require the tribe to sacrifice a fundamental part of their identity, but a decision must be made nonetheless.

In 2281, the Happy Trails Caravan Company (the Courier among them), led an expedition from the Mojave Wasteland's Northern passage in the hopes of re-establishing contact with New Canaan. The caravan was ambushed and all but the Courier slaughtered in the ensuing fray. And it is then that the Courier begins to shape the destinies of a people. For better or worse, the Courier's actions will forever change the once serene landscape of Zion and usher in a new age... 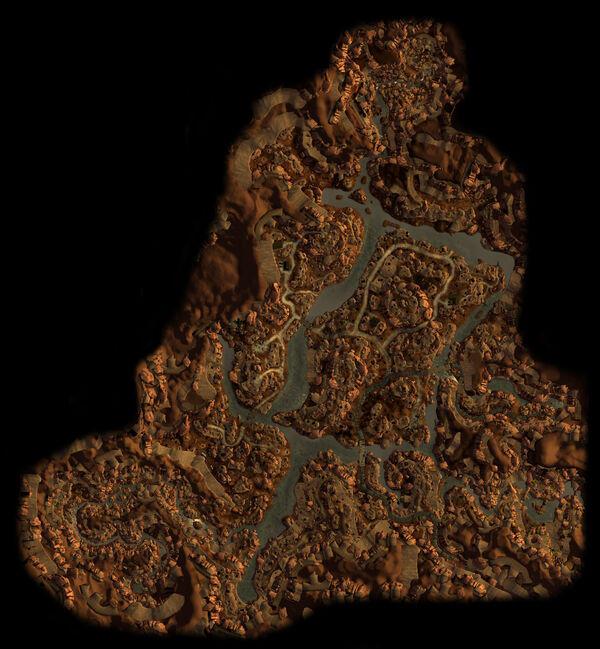 Zion Canyon is roughly one-quarter the size of the Mojave Wasteland, and is a treacherous two week journey on foot to cover the distance.[11] Slot canyons surround the entire valley, which makes it difficult to navigate and get into the canyon at all.[12][13][14] Getting out of the canyon through those slots is even more difficult on account of steep descents into the valley.[11]

The entire canyon is composed of red-orange rock faces with the Virgin River cutting through the landscape. Many bridges connect the east and west banks and the islands in between. Throughout the canyon, deciduous and coniferous trees thrive. Having been a national park before the war, there are several Ranger stations spread periodically through the area. Ranger substations Eagle, Osprey and Peregrine are set in a triad with one in the west, north and south, respectively. They all communicated with The Aerie in the center of the canyon. There are also several campgrounds and scenic overlooks set up around the landscape for the families that used to visit in happier times.

Countless caves perforate the canyon, some having been used by The Survivalist as shelter for his lifetime in Zion and others house the canyons assortment of natural wildlife. A native tribe, the Sorrows consider the caves that "The Father in the Cave" occupied sacred and are not to be entered, or else bad fortune sets upon those that trespass.

The Sorrows have made camp in The Narrows, a series of slot canyons that proliferate the northern ridge of Zion Canyon. It's a large network of overhead bridges connecting cave systems to one another. The Dead Horses have occupied Eastern Virgin and set up their camp in a basin created by an off-shooting tributary of the Virgin River that flows to the east (hence "Eastern Virgin"). The White Legs inhabit Three Mary's, a section of the canyon in the west formed by the flow of the Virgin River. It is mostly a hilly interior in the box canyons with pre-War garbage spread about with White Legs tents set up along ridges overlooking the main canyon. However, these tribes do not necessarily stick to their camps; Dead Horses and Sorrows tribal members sneak around the whole canyon and the White Legs patrol the roads often accompanied by their mongrels.