Annabelle is a unique missile launcher in Fallout: New Vegas. 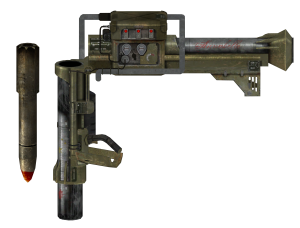 Annabelle is a unique pre-War missile launcher that was used during the annexation of Canada and at least one campaign against the Chinese in the Sino-American War. It features seven kill marks, four for marks for Canada, marked in red maple leaves, and three marks for China, marked in yellow stars. The original owner of the weapon stenciled Annabelle on the rear part of the launching tube, in cursive script.

Annabelle has a built-in guidance system to improve accuracy, and uses less AP in V.A.T.S. than the standard weapon. It is also lighter and has a lower Strength requirement.