Oh, he used to be as tough as the rest of us. Wasn't so long ago, we fought side-by-side to Scourge the Pitt. But somewhere, he went soft. Stopped looking at the big picture, and started trying to save every tribal and illiterate community he found. When he had us helping those savages instead of recovering tech that could help us all, that's when we objected and became Outcasts.

”— Henry Casdin on the Schism

The Brotherhood Outcasts[3] were the loyalist chapter of the Brotherhood of Steel in the Capital Wasteland in 2276 until their dissolution in 2283.

The Brotherhood Outcasts were a contingent of Brotherhood of Steel soldiers who split from Elder Lyons' group at the Citadel in 2276.[1] The Outcasts attributed their departure to their belief that Elder Lyons had lost sight of the Brotherhood's true mission, and the reason for their presence in the Capital Wasteland; the discovery and acquisition of advanced pre-War technology.[4] Their secondary objective was to keep dangerous technologies out of the hands of raiders, tribals, and everyone else without the aptitude necessary to safely utilize them.[5]

The group did not plan on separating originally. Future founders of the Outcasts were merely dissatisfied with Lyons' focus on protecting the wastes by killing super mutants, seeing it as an ineffectual waste of men and resources that would ultimately destroy the Brotherhood. The situation gradually worsened, finally tipping when Elder Lyons ignored their repeated requests to recover tech from Fort Independence, a pre-War military research facility.[6] Rallying behind Paladin Henry Casdin,[7] the dissenters abandoned Lyons' command and left the Citadel, taking a large part of its weapons and equipment stockpiles with them. Lyons lost more men that day than he ever did fighting the mutants.[8][9] The loss of men and materiel had a significant negative impact on the combat performance of Lyons' chapter, greatly reducing its ability to project power throughout the Capital Wasteland.[7]

Under Casdin's command, they seized Fort Independence, where they pushed back the indigenous raider groups and adapted the former military base for use as their headquarters. Termed "Outcasts" by their angered former brothers and sisters, the renegade soldiers adopted the name as a badge of honor,[10][11][12] painting their armor red and black to distinguish themselves from the organization they no longer served. They have also reorganized their rank system and decentralized their operations, to make tech retrieval and long range patrols easier to organize.[13]

A year after the split, the Outcasts organized a system of regular patrols, scouring the wasteland for technology, and began to excavate several locations, including the Virtual Strategic Simulations facility, in order to fulfill the original mission objectives. Their focus on retrieving technology meant they had a number of obsessions, including procurement of alien weapons from locations in the Capital Wasteland, such as possible crashed U.F.O. and pre-war government installations.[14]

In their eyes, they remained the true Brotherhood of Steel,[14] and considered Lyons guilty of abandoning the principles the Brotherhood stands for. Ultimately, they planned to regroup with loyalist chapters in the west, but remained stuck protecting Fort Independence and their considerable stockpile of powerful technology.[15] While Lyons struck their names from the Codex, the Outcasts believed that their actions would be vindicated when they regrouped with the Western Brotherhood.[10]

Ultimately, by the 2280s, Elder Owyn Lyons had died, and in 2283, Arthur Maxson – only 16 years old at the time – was able to broker a peace with the Outcasts and re-integrated them into the Brotherhood of Steel. With the bolstered numbers, Maxson expanded the new Brotherhood up north, into the Commonwealth.[2]

Brotherhood Outcasts wear T-45d power armor repainted black and red. To compensate for their reduced numbers, the Outcasts have supplemented their forces with a number of reprogrammed robobrains, sentry bots, and protectrons painted with the same colors.

In addition to procuring and stockpiling technology from the Capital Wasteland's many ruins, the Outcasts analyze and reverse-engineer what they find, leaving logs at their bases that record their work.

Most Outcast patrols can be found near vaults or high value military assets. They are always located where one would expect to recover valuable pre-War technology or useful salvage materials. Outcast patrols will spawn near the listed locations at preset spawn points and are not random encounters. The locations include Fort Bannister, Constantine and Independence, Wheaton Armory, the National Guard depot, the scrapyard, Smith Casey's Garage, SatCom Array NN-03d and Vaults 92, 87, 101, and 108.

Relations with the outside 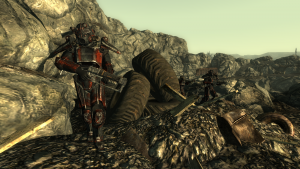 An Outcast patrol in the northwestern Capital Wasteland

The Outcasts have a low opinion of the inhabitants of the Capital Wasteland, typically resulting in them mocking outsiders. They don't trust them[16] but are not directly hostile to any of them, as long as they remain peaceful. They will, however, engage any and all threats to themselves and others. Coupled with the fact that their patrols take them across a majority of the Capital Wasteland, they are, in fact, indirectly making it a much safer place to live (while their parent organization, Lyons' Brotherhood of Steel, remains single-mindedly focused on attacking super mutants in the uninhabited DC ruins, far away from any human settlements). Furthermore, they are known to offer mutually beneficial deals to wastelanders, exchanging technology for valuable supplies, ammunition and explosives.[17]

While Elder Lyons professes that he both understands and accepts the reasons for the Outcasts' departure, the view is not shared by many of his soldiers and as such the Outcasts are considered mortal enemies by Lyons' Brotherhood of Steel, and vice versa.[18] They will shoot each other on sight. It is unknown whether this open hostility is due to orders from Casdin, or mutual anger and distrust between the rank-and-file soldiers of the two organizations.

The Outcasts typically use technology comparable to that of the Lyons' Brotherhood of Steel, relying on stockpiles of equipment they confiscated when they abandoned the Citadel.[8]

Brotherhood outcast soldiers are formidable opponents. They have superior protection, weaponry, and skills to virtually every faction encountered in the Capital Wasteland, including raiders, Talon Company mercenaries, and most indigenous fauna the Wasteland has to offer. Outcasts generally, though not always, operate in patrols of the units. A typical patrol consists of three soldiers or two soldiers and one robot (a protectron, sentry bot, or robobrain making them a bit more dangerous as all of them can open fire the second a hostile appears.

Outcast patrols are generally weaker than Enclave kill-teams, however, and frequently lose to them in direct combat unless the Outcast squad is making use of heavy weapons. Fortunately for the player, Outcasts are usually not hostile (but gruff and rude) when encountered, making their appearance often helpful. Outcasts will fight any of the more hostile indigenous factions and creatures, saving you ammunition, time, and energy, and their fallen can be looted for Outcast power armor and advanced weapons.

Initially, the Outcasts treat the Lone Wanderer like any other local, mocking him as an intellectual inferior. However, since the player can express interest in participating in the tech exchange deal, as an outcast collection agent. Should the player deliver enough tech, the Outcasts consider him a friend of their faction, and they will be permitted to roam the interior of Fort Independence freely, although they aren't given a key - the door to the Fort needs to be picked open or opened with an appropriate key.

The Outcasts also play a major role in Operation: Anchorage, in which a group of Outcasts in the Outcast Outpost under the command of Protector McGraw is trying to acquire advanced military tools, and the only way to enter the locked room containing these relics is by completing a military simulation only accessible by someone wearing a Neural-Interface Device (i.e., Pip-Boy).

Brotherhood Outcasts appear in Fallout 3 and the add-on Operation: Anchorage, and are mentioned in Fallout: New Vegas and Fallout 4.