If you look at this picture Golf Club you will see a woman behind the pownder gang guy look at her weapon.Sgt.Salvator:NCR Rangers 19:14, April 9, 2010 (UTC)

First, its spelled Thompson. Second, I doubt thats what it is. Third, I think it kinda looks like a pump action shotgun.

It is most likely the shotgun mentioned in the previews.
Tommy guns will only appear with the 50 round drum magazine, if they appear at all. Nitty Tok. 14:58, April 10, 2010 (UTC) 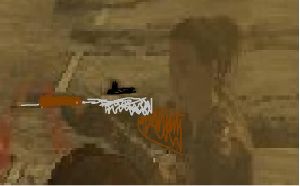 look at the stock

Well using my excellent highlighting skills the stock looks a lot like a tommy gun http://www.modelguns.co.uk/images/milchicag21.jpg

just compare, oh and nitty don't forget that extended mags are a customisable addon Mr Habberdasher 15:10, April 10, 2010 (UTC) I defenitly think it like a trench gun of some sort and like in call of duty world at war you will probably do the same action

If it was a Tommy gun or regular Thompson you'd be able to see either the drum or the normal box magazine around her hand. Unless she's in mid-reload, this gun has neither.

I don't know, Ski, looks like her forearm might be blocking the barrel magazine if it has one. After looking at it more closely I'm torn between either a Thompson or just a lame-ass .32 hunting rifle. Either way, it's almost a certainty that both will appear in FONV. Man, I hope they don't re-use too much stuff... Nuka Kulcha 17:22, April 10, 2010 (UTC)

I think most of the weapons from the last game will probably make an appearance. As for the Thompson issue, I may be mistaken, but I'm pretty sure the drum mags would be big enough to be seen around her hand. Actually, if that highlighting is correct, her hand is where the mag would be for a Thompson anyway.

I don't suppose it matters whether it's a Thompson or a pump-action in the end. Because Obsidian is reusing Gamebryo from Fallout 3, it will not take long at all for the more popular FO3 mods to get ported over. I'd reckon things like 20th Century and Fellout will be ported over before the first person gets 100% completion of the game if they don't work right out of the box. A Tommy Gun will be in the game one way or another, for those of us who want to use a Chicao Typewriter in Vegas. Just don't sign your winnings check with it.....TestECull 15:09, April 12, 2010 (UTC)

For those of us that play on console (360, PS3) it does matter. Since the majority of people with consoles don't have and/or can't get mods for their games, they're pretty much stuck with what they're given.

lol, I suppose. Then again, if my crappy PC can handle Fo3, I'd imagine the typical XPS with a discrete graphics card could handle New Vegas decently, so it's only a matter of getting them interested in modding the game. I was able to convince a Steam friend of mine to buy it again on PC after showing her some of the weaponry I had at my disposal. It's also somewhat possible to mod Fo3 on 360, although it requires either a modchipped console or an SDK. Kinda sucks for the console guys, they miss out on half the fun of a Fallout game really. TestECull 20:39, April 12, 2010 (UTC)

I would happily mod my 360 version if I knew where to get the required hardware.

If you have a dual core CPU, 4GB of ram, an nVidia 8800GS or faster and a decent harddrive, you'll have no trouble with the game. As far as finding a modchip, I wouldn't know where to go. The only reason I bother with consoles at all is Gran Turismo 5, which is PS3 and not out yet. Asking around on the shadier sections of the internet may help, but I would be VERY careful in that area of the internet...modchips may even be flat outlawed, depending on where you live. I know Canada outlaws them, not sure on US laws. I suppose using it to enable modding of a game you legally bought would count as a legit use for such a device, but I have no idea really. TestECull 21:19, April 12, 2010 (UTC)

Its the difficulty in finding the required parts that keeps me from modding my 360. I'm not sure whether or not its illegal to do so, but I do know that it would void my 360's warranty, which I'm reluctant to do. As for my laptop, I don't think the graphics card is up to the level it needs to be.

Ahh, you have a laptop...yeah that might put a bit of a dent in any attempts to play. The slow harddrives they usually have won't help much either. My friend tried to play Fo3 on a Toshiba that had a 780G onboard GPU, newest one by ATI, and on all low it got 8FPS while still in Vault 101. Then again his laptop is a year old Toshiba that sells new for 400 bucks, not exactly top of the line. TestECull 22:02, April 12, 2010 (UTC)

Well, since I don't have a clue, maybe you could tell me if the following is adequate:

As suspsected, your GPU is holding you back. Everything else is good to go. If you were to try to run the game on that laptop, you'd get a slideshow on account of the GPU failing at life. TestECull 04:42, April 13, 2010 (UTC)

Thats about what I figured.

If Nvidia ever comes out with that external video card for laptops, you'd be in the golden country. Here's to hoping. Nuka Kulcha 19:09, April 14, 2010 (UTC)