The Ghost Farm is a small farm at the outskirts of Modoc, created by the Slags above their underground settlement.

The Slags are the descendants of a group of secret militia officers who sealed themselves underground and slowly mutated. Few can bear to be on the surface or stand the bright light of the sun. The Slag population steadily increased since the Sealing. It soon became apparent that they could no longer survive underground without further supplies. So the Seal was broken, and they once again looked to the surface for survival, creating a small farm some years prior to 2241, which to the people of Modoc looked as if the farm appeared out of nowhere.

A group of Modoc's inhabitants were out hunting when they noticed the new farm. Soon after, some of them got together to visit their new neighbor, but they didn't find anyone there. After many months of trying to contact the owners with no success, it was decided that the farm must have been abandoned soon after it was built. So instead of letting the crops rot in the fields, young Karl moved in.

To get rid of the intruder, the Slags, who were not a violent people by nature, came up with the ghost idea, smearing themselves with glowing fungus. After some time, Karl started to tell stories of seeing strange glowing figures tending the crops and feeding the animals at night. The other people of Modoc all laughed at him, thinking he was making up stories. Then one day Karl stopped coming into town.

When the people of Modoc came looking for him, they found bodies, some crucified, while others were left to rot out in the sun. In reality, the bodies were merely props the Slags manufactured to scare off those who try to steal from them, mostly brahmin guts and dummies. While the inhabitants of Modoc believed Karl to be dead, he only escaped to the Den.

Unfortunately, this has been a little too effective. Around 2241, the Slags were seeking to make contact with the surfacers, but no one came to the farm anymore for fear of the ghosts. 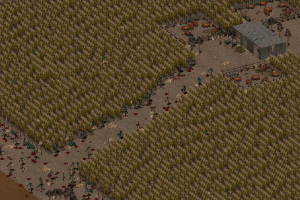 The above ground portion of the farm has the massive fields erected thanks to the hard work of the Slags. The central shed holds tools and equipment, as well as a hidden hole that leads any would-be intruder straight into the lock up of the Slags. 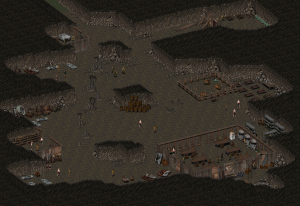 The cavern is the main section of the Ghost Farm, where the Slags live. It's a large underground cave, with facilities necessary to lead a comfortable life: Including a mess hall, library, sleeping quarters, and storerooms. 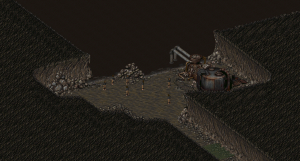 The vast underground lake, connected to the irrigation system through a purifier, is the source of prosperity for the farm. Potentially, it can also help Modoc through the drought.

Jonny can be found here, playing with the other kids.

The Ghost Farm appears only in Fallout 2.